Man flees and abandons car after crashing into drain near Geylang, was heard cursing 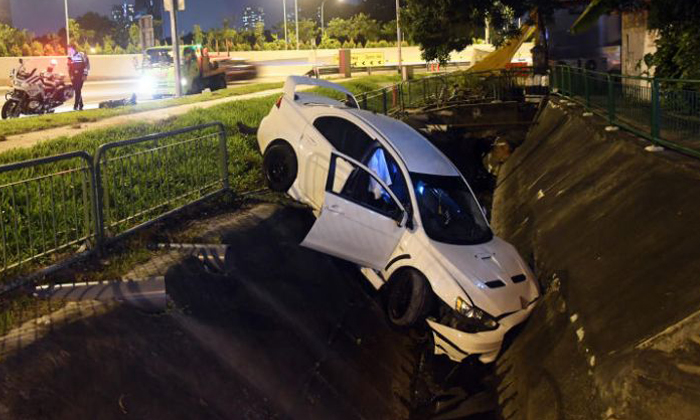 A driver crashed into a drain near Lorong 6 Geylang on Sunday night (Dec 17), then ditched his car and fled after he was helped out of the wreckage by members of the public.

The police said they were alerted to the accident along Sims Way, towards Mountbatten Road, at 8.53pm.

No injuries were reported and investigations are ongoing.

According to Lianhe Wanbao, the driver is believed to have travelled too fast, lost control of his vehicle when trying to make a turn, skidded and crashed through the railing, then ended up in the drain.

When Wanbao reporters arrived at the scene, they saw the white car with its front bumper damaged and driver's door open. However, the driver was no longer at the scene.

Stall vendors and patrons at a coffeeshop located opposite the drain reported hearing a loud crash and seeing the vehicle in the drain.

A vendor, who declined to be named, said he saw the young Chinese driver but no passenger in the car.

"[The driver] was unable to open his car door, so a lot of people went forward to help him by opening the door from the outside. Not sure why, but I kept hearing him use foul language so he might have been drunk," added the vendor.

Another witness said the driver looked fine and left by himself after climbing out of his car. It is understood that he did not go home after the accident.

Stomp understands that the man has been found as of Dec 19 and is currently assisting in investigations.