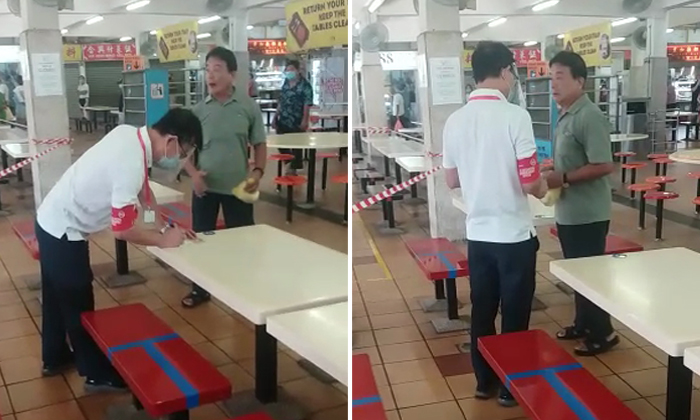 A man was fined $300 for flouting circuit breaker measures after he was seen eating at a hawker centre and not having a face mask on.

According to Shin Min Daily News, the incident occurred at North Bridge Road Market & Food Centre on Saturday (April 25), at around 7am.

A video circulating online shows the man, who was not wearing a mask, grumbling while having his personal particulars taken down by an enforcement officer.

In the video, a member of the public appeared to be chiding the man for his behaviour. However, the man was unhappy about being reprimanded and argued back.

When reporters visited the hawker centre, an employee at the drinks stall said that the man, who lives nearby, had come to buy a drink prior to the incident.

Seeing that the man did not have a face mask on, the drinks stall employee and several others customers offered him one.

However, the man claimed that he had a face mask but wearing it made it difficult to breathe.

Three police officers subsequently arrived at the scene but the man had already left.

According to a cleaner at the hawker centre, an enforcement officer had approached the man while he was in the middle of having his meal. However, he only handed over his Identification Card after finishing his food.

Responding to media queries, the National Environment Agency (NEA) confirmed that an enforcement officer had found the man eating at the hawker centre and not having a mask on.

The officer approached the man to inform him that he had flouted circuit breaker measures and requested for the man's personal particulars.

The man was issued a fine of $300 and told that subsequent offences would come with a higher penalty.