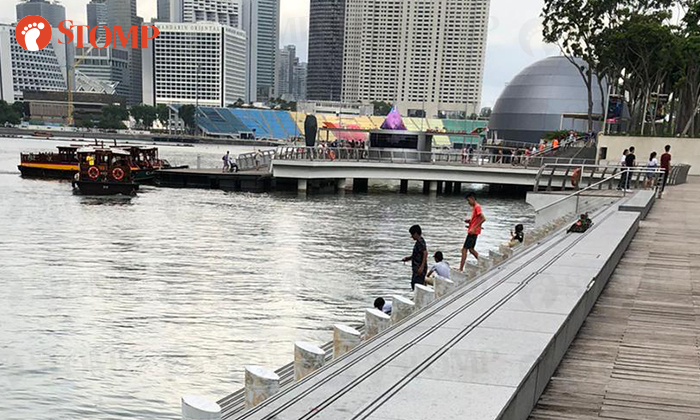 A Stomper felt that a group of youths were irresponsible after seeing them fishing at Marina Bay on Monday afternoon (Dec 23).

Stomper Joshua contributed a photo of what he saw and said: "I was walking past the area at about 3pm when I noticed this group of youths.

"There were some adults as well and in total, there were about 11 people fishing there. It's near Red Dot Museum.

"I have been jogging past that area for about two years, so it's not my first time seeing people fishing there.

"I go for a jog every weekend, on both Saturday and Sunday.

"It seems like more people fishing there as compared to before. The numbers are increasing.

"I feel that they're very irresponsible. There are designated areas where they can go fishing, cook and eat.

"Shame on them for destroying the natural habitat and for disgracing all Singaporeans."

According to the Public Utilities Board, fishing is permitted at selected reservoirs and waterways. These include Bedok Reservoir, Rochor Canal and more.

Related Stories
Stomper concerned after seeing trio fishing at prohibited spot in Coney Island
Youths fishing at Merlion Park have been identified and will be counselled: PUB
Man fishes at Punggol Waterway despite warning signs around
More About:
fishing
Marina Bay
youths