Man finds 'extra topping' in bubble tea from The Alley at Jewel: A plastic cap 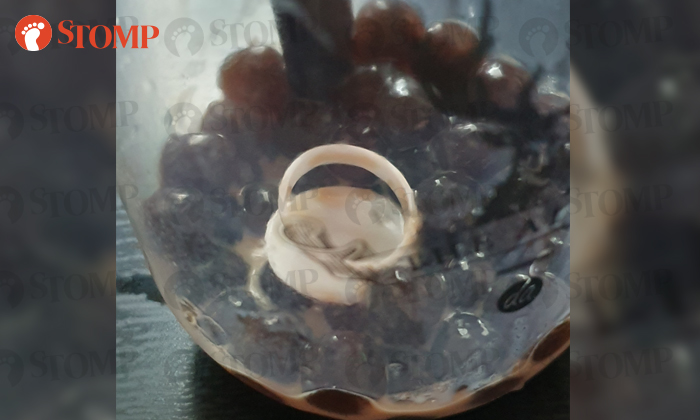 Bubble tea chain The Alley has responded to feedback from a customer who said he found a plastic cap in his drink at its Jewel Changi Airport outlet on Nov 9.

Stomper Andrew said he had purchased the store's signature Brown Sugar Deerioca Fresh Milk beverage, only to find an 'extra topping' nested among the pearls at the bottom of his cup.

He told Stomp: "Guess what, they included an 'extra' milk carton seal cover with the pearls.

"Fortunately, the plastic cap was too large to go through the straw. Otherwise, I could have swallowed it accidentally.

"Staff at the store have got to be more diligent when preparing drinks."

In response to a Stomp query, a spokesman for The Alley Singapore said: "We are aware of the incident at our Jewel outlet as the customer had brought it to our attention.

"We have escalated the issue to our local management team as well as The Alley HQ in Taiwan.

"An investigation had been carried out to discover the nature of the incident, and necessary steps and working policies have been put in place to prevent similar incidents from happening again.

"We have also highlighted the issue to all The Alley crew members to educate and emphasise the importance of food safety.

"At The Alley, food safety is a top priority and we take them very seriously. We pride ourselves on giving the best experience for all our customers."

According to the spokesman, Andrew was given a refund for his drink and gifted with two complimentary beverages as a gesture of goodwill.

The spokesman added: "The customer was pleased with the outcome and service recovery.

"As such, we have closed this incident."

This incident comes after a customer reported finding a fingernail in her bubble tea from KOI's Nex outlet earlier in November.

Stomper Anon was subsequently given a refund for the affected drink as well as a replacement beverage, said a KOI spokesman.