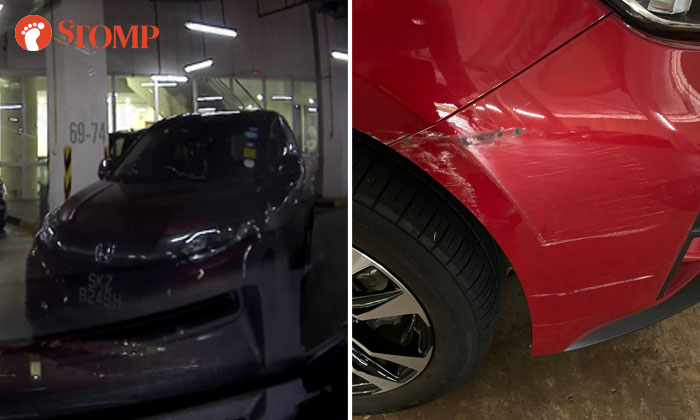 Stomper JS was shocked to find deep scratches on his car after returning to it at the National Library carpark on Feb 12 at 6pm.

He reviewed footage from his in-car camera to see what had happened and shared the video with Stomp as well.

"I reviewed the footage and saw my car was hit earlier that day at about 2.47pm," he said.

"The driver of SKZ8248H hit my car while trying to park head in.

"He drove off after realising he hit my car and went to park his car at another lot.

"At around 5.13pm, he came back to see if my car had any camera installed which unfortunately for him, everything was caught on camera.

"He later went back to his car and drove off.

"He had more than two hours to leave a note and could have settled everything privately but he did not.

"It's really puzzling why someone would do that even though there are so many cameras around in this modern age.

"I have since made a police report and the driver has yet to respond to his insurance despite me making a claim against him.

"I hope this is a lesson for those who do not have a parking mode on their car cam to go and install one."

Related Stories
Family looking for driver who knocked down woman at Changi Business Park in hit-and-run
Pregnant mum with toddler in car gets hit by another vehicle along Tanjong Rhu Road
Yet another person's car gets damaged in hit-and-run at Pasir Ris carpark
More About:
hit-and-run
damaged
scratch car
carpark
parking
parking fail