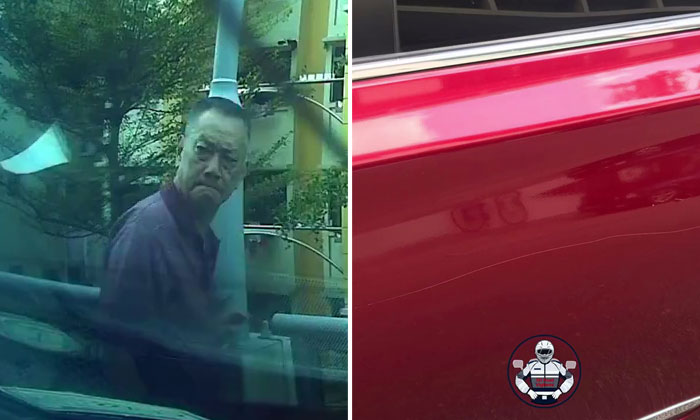 A car owner found a long scratch on his car after parking at a multi-storey carpark at Block 18A Toa Payoh Lorong 6 on May 26 at about 9.50am.

After reviewing his car cam footage, he saw a man in a purple shirt whom he believes to be the culprit standing behind his car.

In the video that was shared in a post on SG Road Vigilante's Facebook group, the man appears to be peering around and over the edge of the carpark before walking out of the video frame.

As he is walking out, a grinding noise that sounds like metal scratching metal is heard.

The man is then seen walking away from the car from the front car cam.

According to the post, the man had taken issue with the car owner who had sounded his horn at him for "taking" the parking lot he had been waiting for.

The video included earlier footage of a silver car swooping in and taking a recently-vacated lot despite the fact that the driver of the car cam had been waiting at the side for a lot to free up.

However, the car owner apparently did not "pursue the matter" and went on to park on the carpark's roof.

That's when he alleged that the driver of the silver car later went up to his car to "scratch" it.

Netizens have slammed the man who scratched the car as "spiteful" and "childish.

While some said that the driver with the car cam should not have sounded his horn so aggressively at the other motorist, others rebutted that the uncle should not have damaged another person's property because of it.