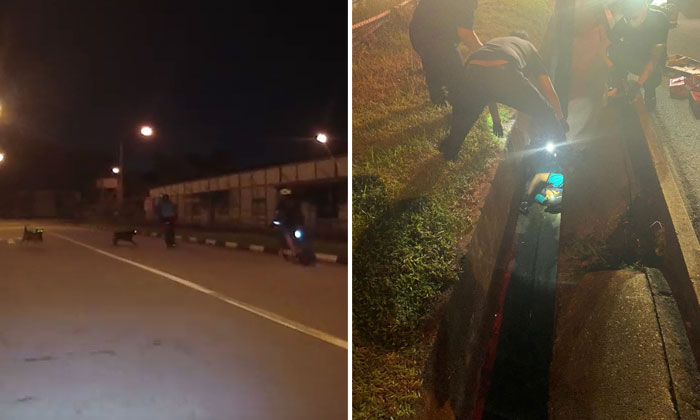 A cyclist was taken to hospital after falling off his bicycle and into a drain after a group of wild dogs ran towards him and another cyclist along Shipyard Road on Monday (Feb 15).

Stomper Jane shared with Stomp a video and photo of the incident that has been circulating online.

In the video, the two cyclists are seen cycling along the road when two dogs start running towards them.

The cyclists lose balance with one falling onto the road and the other hitting a kerb before falling into a drain by the side of the road.

The dogs then return to their pack.

According to the timestamp on the video, the incident happened just before midnight.

A cyclist is seen lying in a narrow drain in the circulated photo.

In response to a Stomp query, the Singapore Civil Defence Force (SCDF) said it received a call for assistance along Shipyard Road near no.49 Shipyard Road at about 12am on Tuesday (Feb 16).

"Upon SCDF's arrival, a person was found in a drain," a spokesman said.

"SCDF used a stretcher to rescue the person and conveyed the person to Ng Teng Fong Hospital."

Ms Jessica Kwok, group director of the Animal & Veterinary Service (AVS) said in a statement to Stomp: "The AVS, a cluster under the National Parks Board (NParks), has received feedback about a chasing incident involving stray dogs and cyclists who were cycling at 45 Shipyard Road.

"We are working with their caregivers and the Society for the Prevention of Cruelty to Animals (SPCA), our Animal Welfare Group (AWG) partner managing the area, to trap, sterilise and rehome the dogs where possible."