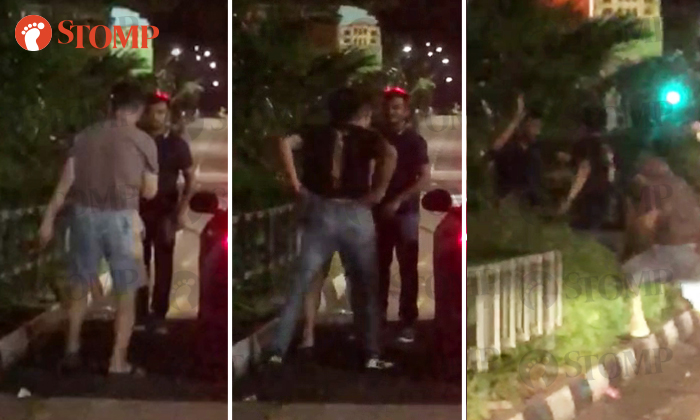 Two men were seen raining blows on a passer-by in Bugis in the wee hours of Saturday (May 25).

Stomper Joe witnessed the altercation along Bali Lane at around 2.45am, and filmed a video which he then sent to Stomp.

Joe had been walking back to his car, which was being driven by a valet, after a drinking session when the incident occurred.

He told Stomp: "A man behind me was walking along the road when he tripped and fell

"A kind guy rushed over from another direction and helped him up. He asked if the man was okay.

"However, the man got aggressive. I believe he was pretty drunk.

"Friend #1 came from behind and started to assault the kind guy, and the man joined in immediately.

"Friend #2 (the one with tattoos and who seemed sober) saw me taking a video so he went over to stop the two embarrassing idiots from hitting the kind guy."

In the video, two men can be seen punching the passer-by, who has his arms raised in defence.

They continue to rain blows on him until he trips over the kerb and falls down into the bushes.

When the passer-by gets up on his feet, the first man shoves him back down again.

Stomper Joe, who could not hear what the men were saying, added: "I left before they did, so I'm not sure what happened afterwards.

"The first guy probably felt embarrassed for falling down and took it out on the passer-by.

"Please make these idiots famous for ganging up against a skinnier guy."