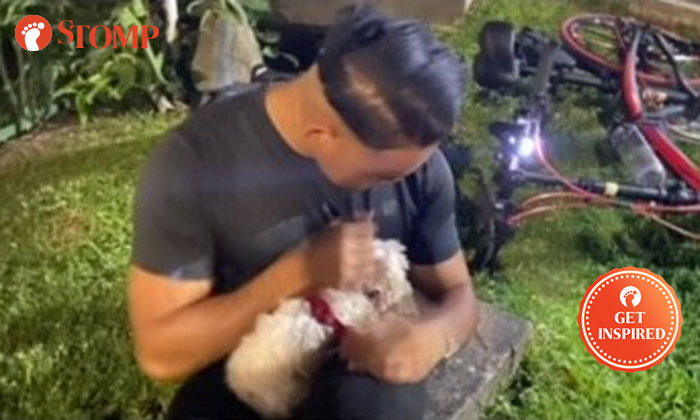 Kelvin and his wife were walking their dog across a bridge when they heard a "weak dog bark" coming from the canal.

"On closer examination, we were surprised to find a small white dog stranded in the canal," he said.

"There was a father-and-son cyclist team already trying to mount a rescue.

"We assessed the canal for a possible access point to walk down into the canal to rescue the dog.

"The only access point was a stair leading to the bottom of the canal on the opposite side of the canal.

"This would mean that the rescuer had to walk across the canal, where the water was ankle-deep."

The Stomper added that it was dark and that the rescue would be risky as the rescuer would have to walk across the canal without seeing what he was stepping on.

"The cyclists and I were hesitant to take the risk and we were contemplating calling a relevant department who would be better equipped to mount the rescue.

"At this point, a young man walked past.

"After finding out what happened, he volunteered to mount the rescue.

"He lamented, ‘I can’t let it go, there is an animal involved here!’

"With that, he sprang into action.

"He left his belongings on the side of the canal and asked my wife to look after them while he attempted to jump into the canal.

"Realizing the canal was too deep for him to jump safely into it, I pointed out there were stairs at the opposite side of the canal."

Kelvin also cautioned him on the possible dangers of entering the canal but the man said he was trained in outdoor adventure at Pulau Ubin and was confident he could carry out the rescue.

"Once he reached the stranded dog, he calmed it down by caressing it repeatedly before picking it up.

"He reported to us that the dog was partially blind and appeared to be very weak but it was safe.

"He then carefully walked across the canal and back up through the stairs with the dog in his arms.

"While this was happening, a passer-by lady, tried to locate the dog’s owner by sending messages to her group-buy WhatsApp chat group whose members were residents staying nearby.

"Miraculously, she managed to locate the dog owner and directed her to meet us at the location.

"As the young man walked up the stairs, there was a passer-by that gave him a hand.

"At this time, there was already a small crowd gathering around. I walked up to the young man and thanked him for his deed.

"He responded humbly, ‘Jesus had helped me the same way!’"

The Stomper suggested the man take a photo with the dog hehad rescued while waiting for its owner to come.

"After a while, a young woman cycled up to us and identified herself as the owner of the lost dog.

"She was appreciative of us finding her dog.

"I explained that she should thank the young man who had risked his own safety to rescue the dog who had fallen into the canal.

"On hearing this, the young woman started tearing up and was so emotionally shaken that she knelt down.

"She was understandably overwhelmed as she didn’t expect she would be able to reunite with her lost dog again."

She repeatedly thanked the young man and explained that she had gone cycling with her dog for the first time and had not realised she had lost it while cycling.

"The young man, on the other hand, was trying to downplay his deed and he pointed out that it was a collective effort in helping the dog."

"As he parted, he said he would hope that we could see each other around the neighbourhood again soon as he often skateboards at the East Coast.

"He then identified himself as Mike.

"The young woman ran after Mike to get his phone number after she recomposed herself.

"Fifteen minutes later, as my wife and I were walking back, the canal was filled up with incoming tidal water.

"The dog would have drowned if Mike had not mounted the rescue in time.

"It was a heart-warming incident.

"While Mike was the hero of the day, he was modest and humble.

"I am glad that we have such an everyday hero living amongst us."