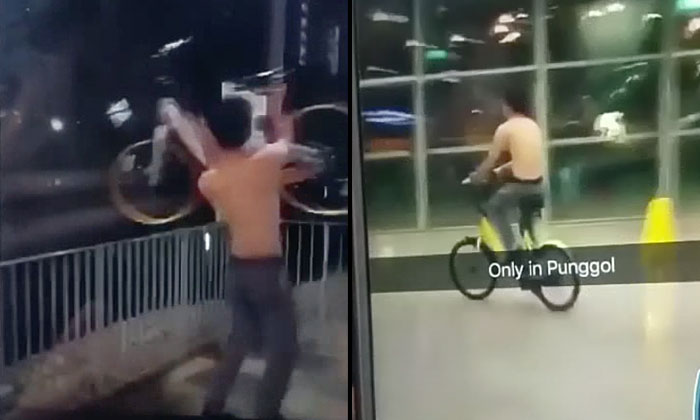 A compilation of Instagram videos showing a man abusing an ofo bike has been circulating online.

Stomper 123 alerted Stomp to the video.

In the video, a man, bare chested is seen  throwing a oBike bike into a canal while laughter can be heard from the background.

The man was also seen riding an ofo bike in a MRT station, accompanied with the caption:

The man also knocked down a few dustbins much to the bewilderment of passers-by.

The same man is then seen riding within the bus interchange and finally speeding down a road on the bike.

According to Stomper 123, the incident happened in Punggol.

The videos come in light of another incident in which a 14-year-old boy was arrested after throwing down an ofo bicycle from the 30th floor of Block 116B Jalan Tenteram.

A video of the boy was circulated online and became viral before his arrest.

It is unclear when the videos were taken.

Related Stories
ofo bike thrown from 30th floor of Jln Tenteram block: 14-year-old arrested
Which idiot removed the locks and number plate of this ofo bike and chained it up at Lengkok Bahru?
Jogger finds ofo bike lying in Jelapang Canal: "This is unacceptable and absolutely atrocious"
More About:
Ofo
abuse
punggol