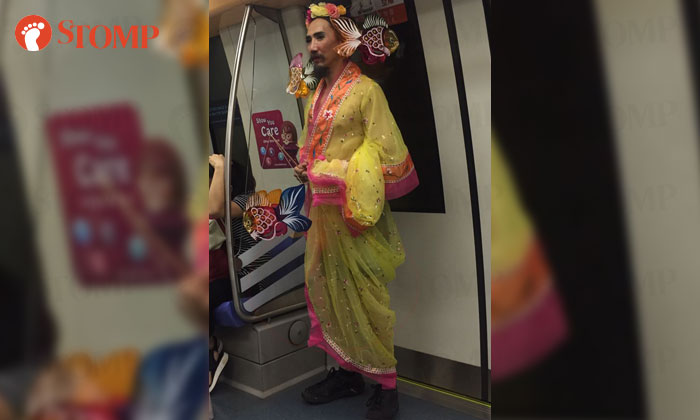 As the Mid-Autumn Festival approaches on Oct 4, many are busy buying mooncakes and getting ready for the celebrations.

Stomper Will was fascinated when he saw the moon goddess, Chang'e riding the North East Line...and wearing a beard on Thursday (Sep 28)

A man had decked himself out in a yellow and pink robe with matching headgear as he rode the train, much to the amusement of other commuters.

According to Will, reactions were mixed.

"Many were amused and some went to take photos with him," he said.

"However, there were also those who appeared awkward by his presence and others who just ignored him.

"I thought it was fascinating!

I'm not sure what it was about but he got off at Chinatown station.

When asked if it could be a publicity stunt, Will said he doubts so as the man was not promoting anything or giving out goodies.

Related Stories
Woman arrested after stripping down to underwear and dancing in rain for 8 hours at Bedok
Netizens make fun of photo showing woman's "ripped jeans level 9000"
Could this be the most effective way to track your 10k steps a day?
More About:
unusual
wardrobe
attire
MRT train
train
MRT
Chinatown
unusual sight