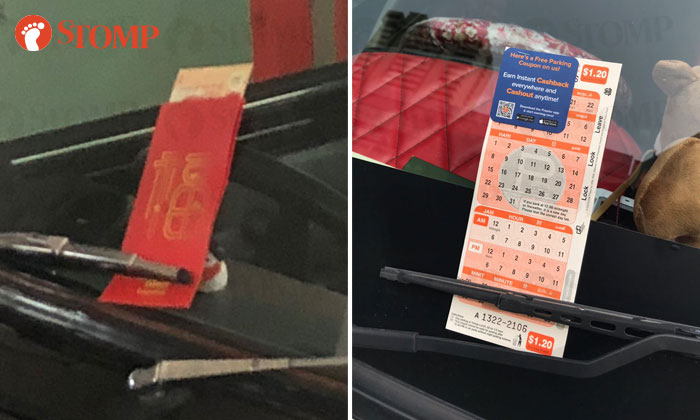 Stomper Bob was intrigued when he noticed that several cars parked at Block 158A Jalan Teck Whye Carpark on Jan 13 had $10 hongbaos on their windscreens.

However, he soon realised that they were not real.

"Forget it, it's just an insurance gimmick," he said.

On Jan 10, Stomper Martin found a similar hongbao which turned out to be a marketing stunt by Budget Direct Insurance.

While some drivers were getting hongbaos on their cars, others were receiving free parking coupons at open carparks located at Prinsep Street and opposite Cathay Cineleisure Orchard.

"At first I thought it was fake but after taking a look, I realised it was a real parking coupon worth $1.20.

"The card said, 'here's a free parking coupon on us!'"

"I'm wondering why they are still giving parking coupons after drivers are being encouraged to use parking.sg," he said.

Some applaud the ingenuity of companies who get creative with their publicity, but others do not take too kindly to it.

"I think it's annoying, I don't like people putting things on my windscreen," Bob said.