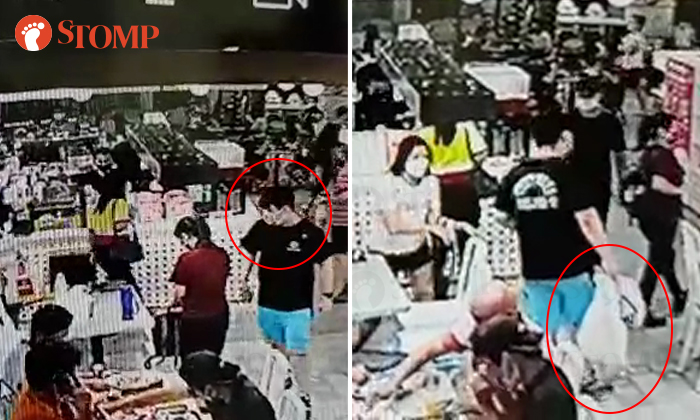 Police are investigating an incident in which a man was seen taking a couple's groceries from a food court at Tampines Mall.

Stomper Y shared CCTV footage of the incident that occurred at Kopitiam food court last Friday (Aug 27), at around 7.40pm.

Y said: "My wife and I were waiting for a table with three people to finish up their meal. As they were clearing their plates, one of them told me I could sit down already.

"I told my wife that I am leaving our grocery bag on a chair, away from the three people's belongings are on the table. I then went to top up my Kopitiam card.

"After clearing his plates, a man in a black top and light blue shorts came back and started taking his table stuff.

"But just as my wife looked away, he also took my bag, looked inside and then left hurriedly. He is also seen quickly glancing back at my wife before disappearing.

"My wife only realised moments later that our bag had been taken and informed me. We ran off to look for him from floor to floor, but he was nowhere to be found.

"In case it was not deliberate, we waited one and a half hours for him to return, but he did not.

According to Y, these were the items taken:

The Stomper left his contact details with Tampines Mall and Kopitiam, and lodged a police report on the same evening.

He added: "I am appealing for the man to return my items. Thank you very much."