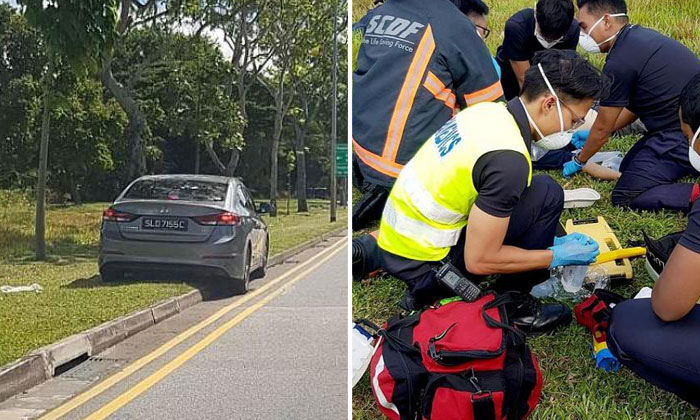 He saw the grey car mounted on the kerb along the road. Noting that the driver was slumped in his seat, Mr Erman Eusope rushed over and found him unconscious.

With the help of three others, including a former Singapore Civil Defence Force (SCDF) officer, Mr Erman, 46, managed to break into the locked car.

But the driver, 52, died after he was taken to Sengkang General Hospital.

The incident took place on Monday near the junction of Tampines Road and Hougang Avenue 7 towards Simon Road.

The police and SCDF were alerted at about 3.15pm and investigations are ongoing.

Mr Erman, who works in the events industry, told The New Paper yesterday he first thought it was a Traffic Police car, but felt something was wrong.

He was driving on the right-most lane, and slowed down to get a better look. When he reached the junction, he called the police, then made a U-turn to see if the driver was okay.

"I knocked and banged on the door and window, but there was no reaction," he said.

He tried flagging down passing vehicles, but for five to 10 minutes, none stopped.

A former SCDF officer, who was driving a van, was the first to help. The two men tried unsuccessfully to break the rear passenger window.

They later got help from a container truck driver, before the group finally broke into the car using the hammer of a lorry driver delivering gas canisters and got the driver out.

The former SCDF officer then performed cardiopulmonary resuscitation on the man until the paramedics arrived.

Mr Erman, who has two boys aged four and two, said it was heartbreaking to see the wallpaper on the driver's phone - a photo with the man's wife, son and daughter. He later found out the driver had died.

"What if it was me, what would have happened? That was what has been playing in my head... It is still raw to me," he said.

Mr Erman, who attended the man's wake last night, said the family are still in shock.

"If I was a bit earlier or on the left lane, I would have stopped immediately," he added.

"I really tried my best."