Man dies after setting himself on fire in Sengkang flat 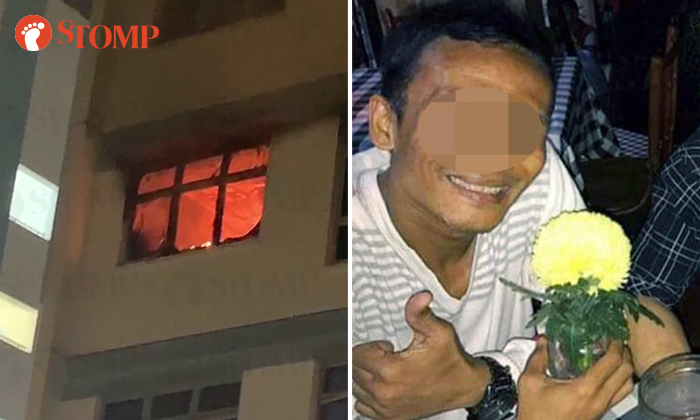 A 44-year-old man died after he had apparently set himself on fire in his Sengkang flat at Block 351C Anchorvale Road on Tuesday morning (Jan 28).

Stomper Jean alerted Stomp to the fire on the fourth floor of the block and shared videos and photos of flames inside the flat and smoke escaping out one of the windows.

The Singapore Civil Defence Force (SCDF) told Stomp that they responded to the fire at about 4.20am.

"SCDF conducted forcible entry into the unit and extinguished the fire, which involved the contents of a bedroom, using one water jet," an SCDF spokesman said.

"A man was conveyed to Sengkang General Hospital."

The man, Lei Zu An, had succumbed to his injuries after he was taken to the hospital.

Reporters who visited the unit on Tuesday said no one was there. They observed that the house's interior and the walls along the corridor were covered in soot. There was also a pungent smell of smoke

Housewife Wei Nuo, who resides in a unit on the sixth floor, told reporters that her husband had woken up to use the toilet. He only knew that a unit downstairs had caught fire after smelling smoke.

"The fire was really large at the time. The windows of the affected unit had shattered. Flames were pouring out of the windows and it looked very dangerous."

Another resident on the fourth floor added that firefighters had knocked on his door and told them to evacuate. About 20 households were evacuated that day.

Shin Min Daily News said the deceased had apparently started the fire on purpose. When firefighters broke down the door, a part of the man's body was already burnt but he was still breathing.

Some residents saw paramedics performing cardiopulmonary resuscitation (CPR) on the man after he was rescued from his flat.