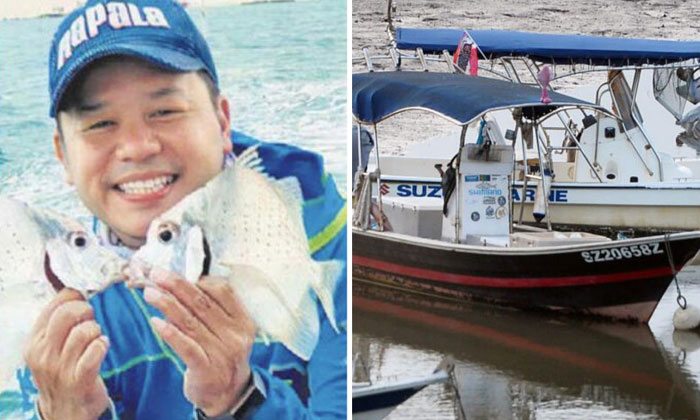 Saturday (Jan 30) was cloudy and windier than usual when fishmonger Mr Tan Lai Koon left a jetty at Pandan River with his friend Mr Jon Lau to go out to sea.

Mr Lau, 45, had chartered the 8m-long fibreglass boat for around four hours of fishing near Pulau Bukom. The managing director of Strategic Data Governance had gone fishing several times before with Mr Tan.

Also on the boat was a friend of Mr Lau's and her two teenage sons.

None of the passengers on the boat was wearing life vests that were available on board.

Just after two hours, at about 5.30pm, the trip took a tragic turn.

"I heard a splash and rushed to the stern of the boat to discover that Mr Lau had fallen into the water," said Mr Tan, 50.

Seeing that the current was very strong, Mr Tan decided not to jump into the water but extended a fishing rod to his friend, who reached out for it. Mr Tan noted that Mr Lau was about 2m away and looked calm in the rough water.

"I asked him to tread water but he shook his head and said he had no energy to do so," added Mr Tan.

But the rod snapped and the waves washed Mr Lau further away from the boat. Panicking, Mr Tan instructed the two boys to take the life buoy to the fallen man while he cut the rope attached to the anchor. The two boys jumped into the choppy water with the buoy.

Mr Tan said he then steered the boat towards the trio in the water. According to him, the whole incident lasted less than seven minutes.

Mr Tan managed to fish Mr Lau and the boys out of the water, and tried to resuscitate his friend, who was unconscious but coughed up some water.

One of the boys called the police while Mr Tan sped the boat back to shore, and Mr Lau's friend continued performing cardiopulmonary resuscitation on him.

Their journey to the jetty at the Republic of Singapore Yacht Club took 10 minutes, where emergency services and the police took over.

In response to queries, a police spokesman said they received a call for help at 52 West Coast Ferry Road at 5.58pm on Jan 30.

"A 45-year-old man was unconscious when conveyed to the hospital and was subsequently pronounced dead," they said.

They are investigating the unnatural death.

A family friend said Mr Lau, who was married, was a kind-hearted person.

The educator in her 50s said she had volunteered in the past with him to help people with autism.

"He was also a foodie who loved experimenting with food."

One of Mr Lau's business partners, who requested anonymity, described him as a friendly person.

"In the three months that we worked together, he was jovial and good at networking," said the man in his 30s.

"I was very shocked to hear the news of his passing."