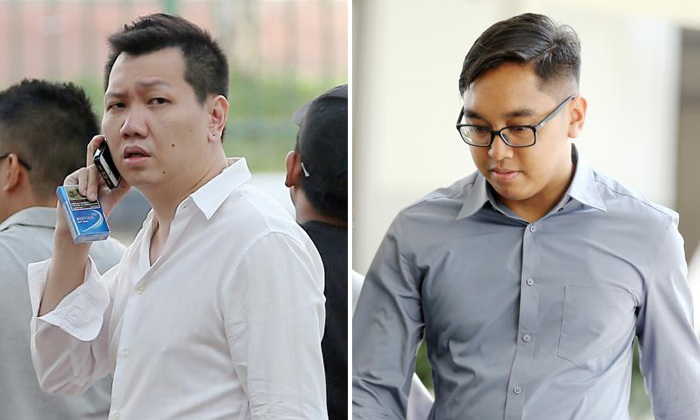 The man accused of driving a Maserati that was caught on video dragging a Traffic Police (TP) officer along Bedok Reservoir Road has denied that he was the driver that day.

Lee Cheng Yan, 35, is claiming trial to 10 charges related to the incident, which happened on the evening of Nov 17, 2017. They include voluntarily causing grievous hurt to the police officer, failing to stop after an accident and obstruction of justice.

Lee, who owned the car at the time, is also facing 59 other charges related to matters such as online gambling and illegal moneylending.

These charges will be dealt with at a later date.

In his opening address on Thursday (Oct 3), Deputy Public Prosecutor Timotheus Koh said Lee drove the car despite being disqualified due to earlier traffic offences.

He also did not have the mandatory third-party risk insurance for the car at the time of the incident.

The court heard that Staff Sergeant Khairulanwar Abd Kahar, 26, had stopped the white Maserati in Bedok Reservoir Road at about 9.20pm as Lee was not using his seat belt.

DPP Koh said: “The victim parked his motorcycle in front of the Maserati before dismounting. The victim then approached the driver’s window to speak to the accused. The accused wound down his window.

“However, instead of complying, the accused fled the scene by suddenly reversing the Maserati before accelerating quickly forward while the victim was standing next to the driver-seat door.”

He added that Staff Sergeant Khairulanwar’s uniform got caught in the driver-side door of the Maserati.

The car, which was moving at between 79 and 84km, then dragged the policeman for more than 100 metres before he fell onto the road. The Maserati then sped off, the court heard.

Staff Sergeant Khairulanwar was taken to hospital to be treated for pain over his right knee, neck and lower back. He was later given more than 20 days of medical leave.

The officer has been medically downgraded by the Home Team Medical Board due to his injuries.

Staff Sergeant Khairulanwar, who took the stand on Thursday, told District Judge Ng Peng Hong that he still feels pain on his lower back when he carries heavy objects. He added that the injuries have affected his career and his promotion prospects.

However, the policeman testified that he could not identify the driver of the Maserati as “everything happened so fast”.

Technician Tay Boon Chong, who also took the stand on Thursday, told Judge Ng that he was in a nearby van with two other people when the incident took place. Mr Tay’s age was not mentioned in court.

Two video clips taken from cameras in the van show Staff Sergeant Khairulanwar being dragged along the road before falling. One of the clips shows the officer lying on the road with passers-by rushing over to help him.

But when cross-examined by one of Lee’s lawyers, Mr S. Balamurugan, Mr Tay told the court that he could not identify Lee, who was seated in the dock, as the driver.

DPP Koh said that after the accident, Lee abandoned the Maserati in Willow Avenue near Aljunied Road.

He added that Lee then went to a friend’s home and told the man that he “ran away from the Traffic Police”.

The court heard that Lee spoke to another friend over the phone soon after and made a similar confession.

If convicted of causing grievous hurt to the policeman, he can be jailed for up to 15 years and fined or caned.