Man dashes out of store after trying on shoes, but wait till you see what happens 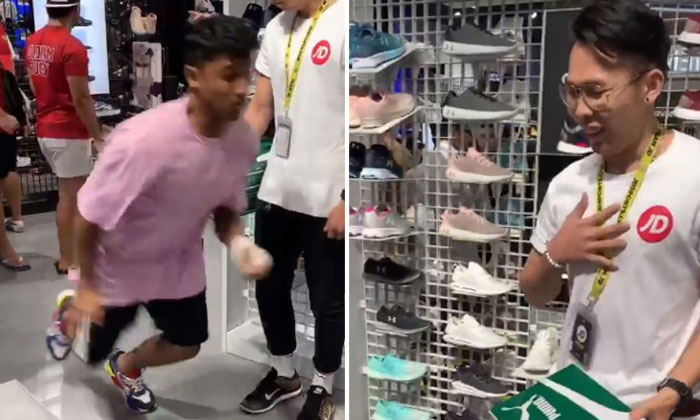 A sales employee's worst nightmare comes true, when a man was captured on camera dashing out of a store wearing shoes he had not paid for.

The video posted on Nov 26 at 9.22pm on Facebook by the man in the video, Facebook user Harith Skin, has been viewed 18 million times.

The incident is believed to have taken place in Malaysia.

The caption accompanying the video cheekily said: "I had to give it a try?"

In the video, the man, in an oversized pink shirt and shorts, is seated and ready to try a new pair of shoes.

The employee helps him open the shoe box and the man puts on the shoes.

The man adjusts the shoes and looks around the area subtly.

He stands up, jogs on the spot in a circle and faces the entrance of the store before sprinting out.

When he sprints out, the employee reacts by chasing him, probably thinking that he was stealing the shoes.

A small group of people outside the store turn to look at him.

As quickly as he ran out of the store, the man runs past the employee back into the store.

He returns to where he was seated before, jumps on the spot a couple of times and sits down.

The employee puts his hand on his chest and exhales, visibly relieved that the shoes were not stolen.

Many Facebook users commended the store employee for chasing after the man.

Facebook user Yang Raimi II was one of them.

Related Stories
This 'super stylo' guy on train belongs to a hair commercial
Man disappointed that '$10 note' on car is just a 'gimmick' -- while others get free parking coupons
Passenger makes Grab driver go to cemetery at night, then goes MIA as a prank
More About:
viral
unusual
prank