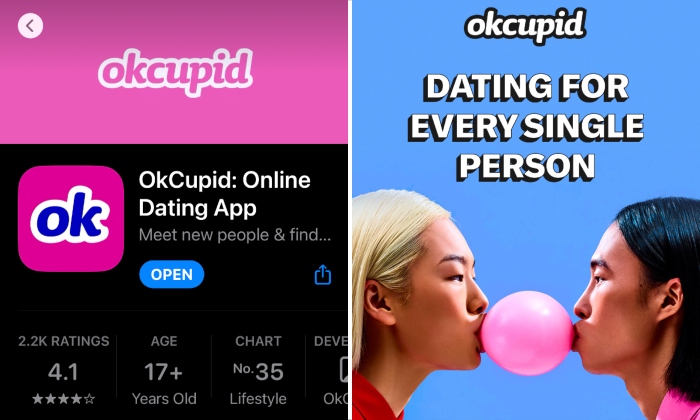 Sim Bing Rui, 25, was jailed for 16 weeks on Friday after pleading guilty to one count of threatening to distribute an intimate recording of the victim.

Another charge of cheating was taken into consideration for sentencing.

He made two profiles on dating platform OkCupid to increase his chances of matching with women.

The first used his own photos and details, under the name “Zavier”.

The second featured photos of another man, whom he named “Jay”.

When women responded to “Jay”, he would tell them to chat with “Zavier”, believing that an introduction through a more attractive person would increase the likelihood of them meeting him.

The conversation soon moved to Telegram, where he asked her about how comfortable she was with sex.

They sent obscene pictures to each other.

She said she really wanted to meet him, and “Jay” told her they could do so at “Zavier’s” flat at 6pm.

He also told her that “Zavier” was looking for a girl to perform a sex act on him, and she agreed to do so.

Court documents do not say why she agreed.

Sim met the victim at Choa Chu Kang MRT Station and introduced himself as “Zavier” before they went to his home.

As Sim did not want his parents to see the victim, he told her to climb into his room through a corridor window.

“Jay” then messaged the victim saying he would definitely meet her the next day if she allowed “Zavier” to record her performing a sex act on him.

She agreed, and Sim took two videos of himself and the victim engaging in sex acts.

The victim later left the flat through the window after saying she did not want to have sex.

“Jay” later messaged her saying he no longer wanted to meet her because she was “not steady” and had failed to live up to his expectations.

On July 25, 2020, “Jay” messaged her, saying she would have to give him her virginity if she wanted the obscene materials to be deleted.

The victim made a police report on July 26, 2020, and Sim was arrested the next day.

The police managed to find the two videos on his laptop.

The court was told the recordings and an obscene photo of the victim were not disseminated.

For threatening to distribute an intimate recording of the victim, Sim could have been jailed for up to five years and fined and caned.

Related Stories
Jail, caning for fake lingerie consultant who got women to send him 174 pieces of 'sexual material'
Ex-NUS student pleads guilty to filming sex acts with two women without their consent
He pretended to be a woman online, posted naked videos to get men to pay for sexual services
More About:
court
sentence
jailed
sex acts