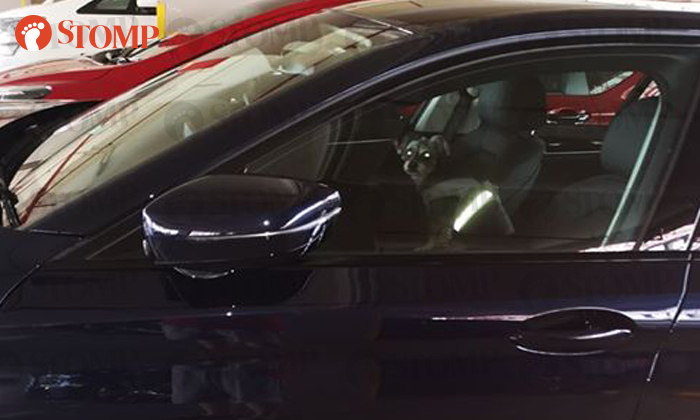 Stomper Ryan was concerned to see a dog left alone in a car parked at Loyang Point in Paris Ris on Friday afternoon (Nov 8).

He spotted the dog in a BMW parked at the shopping centre's carpark at around 2.40pm.

Ryan said: "This irresponsible dog owner left his dog inside the car with no ventilation.

"It was a whopping 31 degrees in Singapore that day and the temperature inside the car can reach as high as 60 degrees in just a few minutes."

"What's worst was that the poor dog was even wearing extra clothing that would have made it even hotter! The poor dog was looking around desperately for help!"

Ryan also shared an advisory from the Society for the Prevention of Cruelty to Animals (SPCA) website about how animals should never be left alone in vehicles.

"Contrary to popular belief, it is not okay to leave your pet in the car, even if it's for a short while, and even if the window is slightly rolled down," said the advisory.

"The temperature inside a stationary car can soar in just minutes, and increases exponentially as compared to the temperature outside the car.

'With their much smaller bodies, animals can sustain brain damage or even die from heatstroke in just under 15 minutes.

Members of the public who come across an animal left alone the car are advised to stay on the scene and try to alert the owner if possible.

They may also contact the SPCA at 62875355 with details of the car's colour, model, and licence plate number, as well as take a picture or video of the animal in the vehicle.