Man claimed he could get Louis Vuitton goods at discount, cheated 6 out of almost $18k 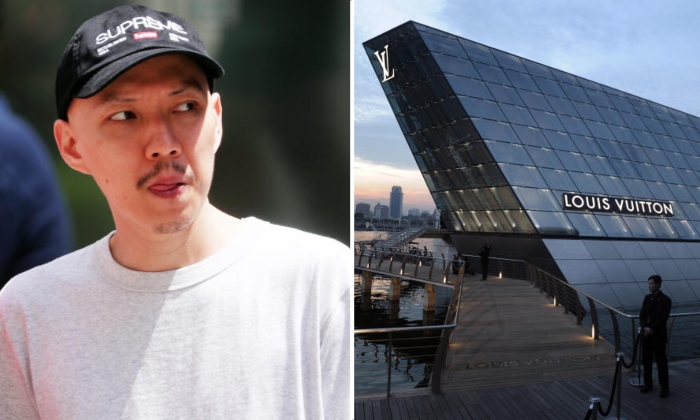 He claimed he could get discounts at Louis Vuitton (LV), by either representing that he worked at the fashion brand or that he was a former employee and had connections to get branded goods at a discount.

The Singaporean, who did work at LV as a contract repair technician between May and November 2018 but was unemployed when he committed the offences, was sentenced to 16 months' jail on Monday.

He pleaded guilty to three charges of cheating, with another three similar charges taken into consideration during his sentencing.

Soon has a history of committing similar offences and his past sentences included one in 2017 in which he was given 17 months' jail.

In court documents, Deputy Public Prosecutor Dhiraj G. Chainani said Soon devised his scheme in September 2019, as he was in debt that mainly arose as a result of a former victim pursuing a civil claim against him.

Part of his scheme included proposing a business plan to some victims in which he claimed he would sell the goods he bought with their money at a profit, and that he would share the gains.

"In reality, the accused was neither employed by LV at that time nor did he have any connections to purchase LV or other branded goods at discounted prices.

"His sole aim was to deceive the victims into transferring monies to him so that he could use the monies to pay his debts and cover his personal living expenses," said DPP Dhiraj.

Among his victims was a 58-year-old woman who was his former colleague.

He reached out to her on or around Sept 19, 2020, via Facebook Messenger, saying he was working at LV and was able to buy goods at up to 50 per cent discount.

She was deceived into thinking that Soon would use her money to buy a wallet for her and three bags that would be resold.

Another victim was a former colleague at a contract job in a hospital who ended up transferring $3,550 to him. Soon approached the 23-year-old woman on or around June 29, 2020, and deceived her into believing he was going to use her money to buy LV items at discounted prices and resell them.

DPP Dhiraj, who asked for Soon to be sentenced to 16 months' jail, said it was particularly concerning that his offences involved the use of a modus operandi which he adopted previously.

"The accused has shown a callous disregard for the law, and a disturbing pattern of resorting to deception to cheat the people around him," said the DPP.

Soon's lawyer Perry Wong told the court that her client suffered from depression and gambling disorder, and had attempted suicide.

She asked for his sentence to be deferred for seven weeks. Soon told the court that his psychiatrist had requested to see him before he serves his sentence.

While noting that the length sought for deferment is unusual, DPP Dhiraj said he was not seeking an increase in bail amount as the prosecution did not want to stand in the way of Soon seeking the treatment he requires.

The adjournment was granted and he will begin his jail term on Nov 21.