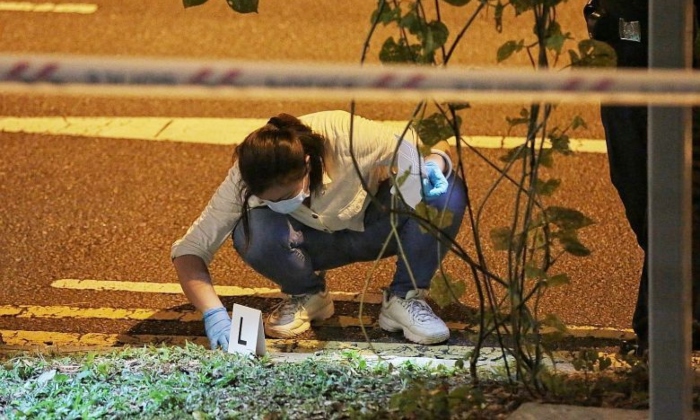 A man who allegedly slashed a Certis enforcement officer with a sickle earlier this week was charged on Wednesday (Nov 11) with one count of assault.

Vikneswaran Sivan, a 30-year-old Singaporean, is accused of using the weapon to slash Mr Mohamad Afiq Mohamad Jamil's calves at Block 503C Canberra Link near Sembawang Road at around 7.40pm on Monday.

Certis and the National Environment Agency (NEA) said in an earlier joint statement that Mr Afiq and another Certis officer were on enforcement duty against public health offences, such as littering and smoking, when the incident occurred.

Both officers were attached to the NEA at the time.

After somebody was issued a fine for a smoking offence, Vikneswaran allegedly attacked Mr Afiq.

The agencies said the attacker "was present but not implicated in the smoking enforcement action".

Some residents in the area told The New Paper they heard screams during the incident.

A domestic helper was quoted as saying: "When I looked out, I saw a man lying on the road in pain. He looked like he had been hit by a car and was holding his leg and screaming."

Vikneswaran was arrested within seven hours of the incident.

For voluntarily causing hurt with a weapon, an offender can be jailed for up to seven years and fined or caned.