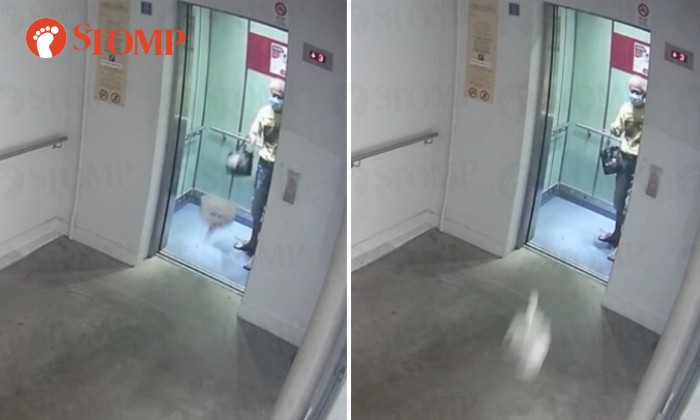 A man was caught on camera throwing a bag of rubbish at his neighbour's doorstep at Block 2 Jalan Kukoh on Sep 21 at 12.36pm.

Stomper Andy informed Stomp about the incident and shared CCTV footage of what happened.

In the video, a man in the lift can be seen throwing a plastic bag at Andy's doorstep.

"Look at this man, he deliberately threw a bag of rubbish at my doorstep," Andy said.

"He lives on the fourth floor while I live on the third floor.

"Previously, he was seen throwing his bags of rubbish at the staircase. Now, he is throwing it at my doorstep.

"This irresponsible man is a troublemaker in this estate.

"He would sometimes drag chairs, stomp his feet and hammer walls during the wee hours."

When asked if this man and the residents in the estate have had disagreements in the past, Andy said: "Nothing has happened between us and this man before.

"He just moved in two years ago, whereas the residents and I have lived here for about eight to 40 years.

"He does these things to cause altercations so he can create a scene and play the victim.

"I have reported this to the police but this man refused to admit to what he did."

In response to a Stomp query, the police said they were alerted to a case of intentional harassment at 5.10pm.

"The parties involved were advised on their legal recourse," said a police spokesman.

In 2018, another man was seen pointing his middle finger at Andy's CCTV camera.