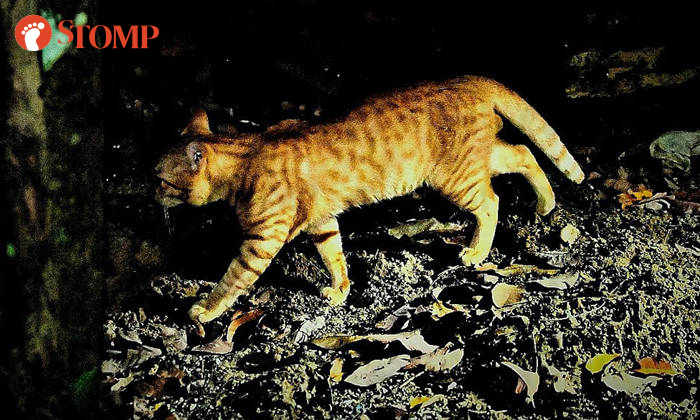 A man was out looking to photograph snakes in a jungle when he heard a sudden crunching of leaves and was thrilled by what he saw next.

Stomper John Lee said he had gone "deep" into a jungle on Friday night (Oct 15), but declined to share the exact location in order to protect the jungle's inhabitants.

John, who is the founder of Wildlife Asia (Singapore), said: "It was around midnight.

"I was out looking for snakes when all of a sudden, I heard a rattling sound likely caused by an animal that had stepped onto the many dry leaves in the area.

"My first and foremost instinct was to immediately aim my camera at the spot where the sound came from.

"To my shock and surprise, it was an animal from the cat family, not a mouse-deer or a wild boar that you can commonly find inside a jungle.

"Wild cats are so sensitive to humans. Upon seeing me, it immediately dashed off and disappeared back into the dense jungle in split seconds.

"I was only allowed two seconds to react and click my camera. Luckily, that was enough to capture one good clear shot of the animal's side view."

This is not John's first encounter with the rare and magnificent creatures that dwell among us.