Man buys 6 durians after sampling, only to tell seller that they aren't ripe later 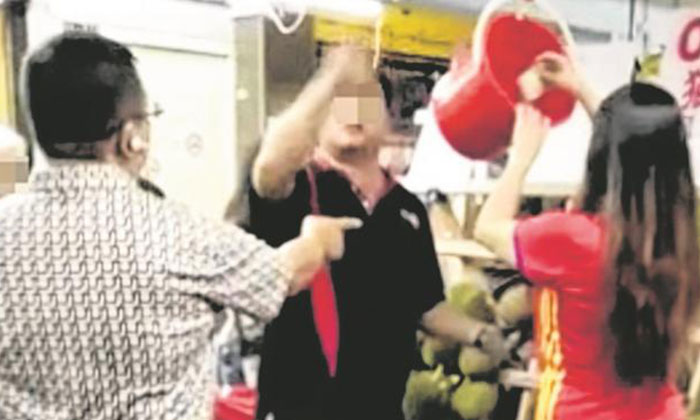 A man suddenly demanded to change all the durians which he had previously sampled, selected and packed into styrofoam boxes, citing that they were ‘not ripe’.

The incident happened at a durian stall at Block 963, Jurong West on Saturday (March 31) at around 9pm.

After the outrageous display by the customer, the stall owner refunded him the full sum of $108 and turned away his business.

Ms Cai, 29, told Lianhe Wanbao that she was queuing up to buy durians when she witnessed the dispute.

She took a video which she sent to the paper, adding that the customer seemed intent on ‘finding trouble’ with the stall owner.

In the video which lasted over a minute, the customer in a checkered shirt and sporting a Bluetooth headset is seen bickering with the stall owner.

He tells the owner that his durians are ‘nothing special’, while the owner retorts:

“Everyone is looking at you now.”

The owner turns to an assistant and asks him how much the customer had paid for the durians.

Next, he tells the assistant:

“Return him the money!

“I opened up so many durians for him already. Just return him the money.”

Lianhe Wanbao visited the stall on Sunday morning (April 1) and the owner, who declined to be named, told reporters that there was a line of more than 10 customers on the day of the incident.

A male customer then said that he wanted to buy six to seven ‘Black Gold’ durians.

The owner, seeing that the man was making a bulk purchase, even gave him a discount.

While the original price was $18 for a kilogram of Black Gold durians, he charged the customer only $15.

The owner said that the customer then sampled the durians and was satisfied.

However, as soon as he opened up the durians and packed the flesh into boxes, the man suddenly had a problem with the quality of the durians.

“He complained about the quality and said that the durians which he sampled were not ripe enough.

“We didn’t want to let the other customers wait longer, and thus decided to do a refund.”

The owner added that after the man received his money back, he stayed for around two to three minutes, telling other customers that the durians were not ripe, but was largely ignored.