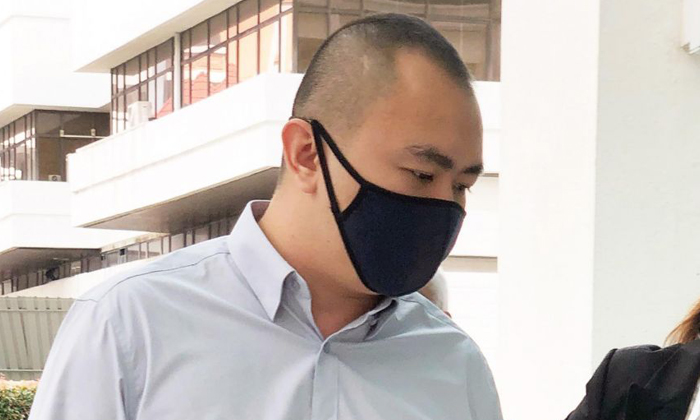 A man was sentenced to three months' jail on Wednesday (April 21) for setting fire to towels in a hotel after staff told him he had to leave the room occupied by his male friend and a woman they had just met at a karaoke lounge.

Lau Sheng Shiun, a Republic of Singapore Navy captain, was convicted last month of mischief by fire with intent to cause damage.

The 34-year-old had visited the W KTV lounge at Foch Road at Jalan Besar on Sept 12, 2017 with Chua Wen Hao, 29, his friend and subordinate in the navy.

They had a few drinks there and met a Vietnamese woman. The men later decided to head to Hotel 81 Violet nearby, and checked in at the front desk at about 9.20pm.

Shortly after, the hotel staff spotted Lau entering their room on the security camera. When the staff informed them that they were in breach of the hotels policy allowing only two persons in a room, Lau left the hotel through a backdoor.

He started smoking in the area where the hotel kept crates of towels, before leaving at about 9.50pm.

But shortly after, someone passing that area saw that some of the towels were on fire. The hotel staff were alerted and they extinguished the flames and called the police.

The police identified Lau from security camera footage and through enquiries. He was arrested on Sept 21 that year.

On Wednesday, Deputy Public Prosecutor Zhou Yihong urged the court to jail Lau for at least three to four months, noting that it was purely fortuitous that the fire had not spread further and caused severe damage.

During sentencing, District Judge Ong Luan Tze said there was some element of vengeance in Lau’s actions.

Lau had admitted he set fire to the towels to express his frustration with the hotel.

His lawyer Josephine Costan said Lau will be appealing against the conviction and sentence.

A spokesman for the Ministry of Defence said Lau has been suspended from the SAF.

“The SAF holds its servicemen to high standards of discipline and integrity, and expects them to abide by the law,” she said.

“Those who commit offences will be dealt with in accordance with the law. If convicted, they could face further actions from the SAF, which may include discharge from service.”

Lau is out on bail for $10,000 pending the appeal. For mischief by fire intending to cause damage, he could have been jailed for up to seven years and fined.