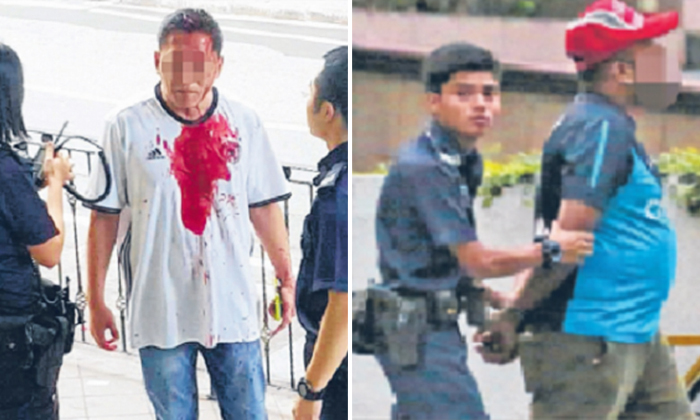 A man was sent to hospital after getting beaten up by several guys outside Orchard Towers on Apr 23. Two males, aged 29 and 40, were arrested in relation to the case.

The victim, Stomper Anonymous, has contacted Stomp to clarify details about the incident, which occurred at around 5.30pm.

Online media reports had said that he was involved in a "fight", which Anonymous said is inaccurate.

He told Stomp, "The fact is wrong. The man was not involved in a fight, he was assaulted. How do I know? Because I'm the man, the victim of an assault case.

In a phone interview with Stomp, Anonymous recounted how he had been smoking outside Orchard Towers, near the road side, when a group of men approached him.

According to the Stomper, there had been a fight at another club in Orchard Towers earlier. The men came outside, saw him and assumed that he was involved.

"They then flipped away my bluetooth handset. I tried looking for it on the road and when I looked away, that's when they started to beat me up.

As the attack "happened very fast" and was probably "less than a minute", the victim was unable to remember exactly how many men had hit him.

He said that there were at least four of then, though a friend later told him that he saw seven people.

He recalled someone hitting his head with a spanner, however.

Anonymous was left lying on the ground, covered in blood.

He was later sent to Tan Tock Seng Hospital, where he received five stitches on his head. He also suffered injuries on his chin, forehead and elbows.

Reiterating that this was not a fight as it was unprovoked, Anonymous told Stomp, "I was ambushed and attacked, with no chance to retaliate or defend myself.

"But I guess I was also lucky.

"Because once I was down on the road, the men retreated, so I was lucky."

Related Stories
Chinese student beaten to death by British BF in 'vicious and prolonged attack'
Does anyone know this man? Viral video shows him hitting woman as she begs him to stop
dispute
fight
attack
assault
Orchard Towers
injured