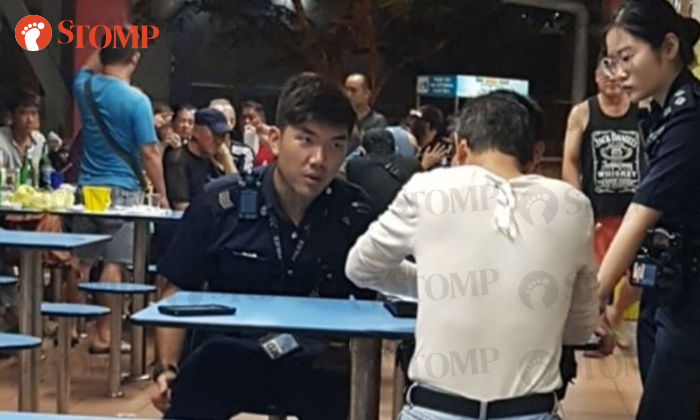 Stomper James said he was savagely attacked by a man at Golden Mile Food Centre on Saturday night (March 31), at around 10.30pm.

According to James, he had witnessed one of the men trying to grope a young woman who was serving beer at the hawker centre.

When he tried to intervene, the man's friend interrupted the conversation and allegedly assaulted him.

James, a 50-year-old private tutor who regularly patronises the kopitiam for dinner, said: "I was sitting in front of this guy and saw him trying to grope a beer girl.

"I told him to follow me to one side, where the staircase was. He followed me and I told him to stop doing this kind of stuff.

"His friend then came from the back. He shouted and asked me, 'Is that your girlfriend?'

"Before I could even reply, the friend hit me, causing me to fall down the stairs and pass out."

In a phone interview, James told Stomp that he was "knocked out on the first punch" and only regained consciousness ten minutes later.

During this time, the man apparently continued to rain blows on him.

He added that the entire incident occurred under a police camera.

When James regained consciousness, he called the police.

James visited Tan Tock Seng Hospital's A&E department the following morning (April 1), where he was diagnosed with a fractured left wrist and a head injury, according to medical reports that Stomp received copies of.

The Stomper, who was given five days of medical leave, said he also suffered chest pains.

He added: "I am sharing this for public awareness.

"This place is very rowdy every night."

In response to queries by Stomp, the police said they were alerted to a case of voluntarily causing grievous hurt involving two men at Golden Mile Food Centre at 10.45pm that day.

Related Stories
So-called "victim" in Golden Mile Tower fight arrested along with 3 others: They were all fighting, says police
Man throws opponent to the ground with 'judo' move during fight outside Golden Mile Complex
22-year-old man who repeatedly stomped on guy taken back to crime scene at Golden Mile Complex
More About:
attack
assault
dispute
Golden Mile