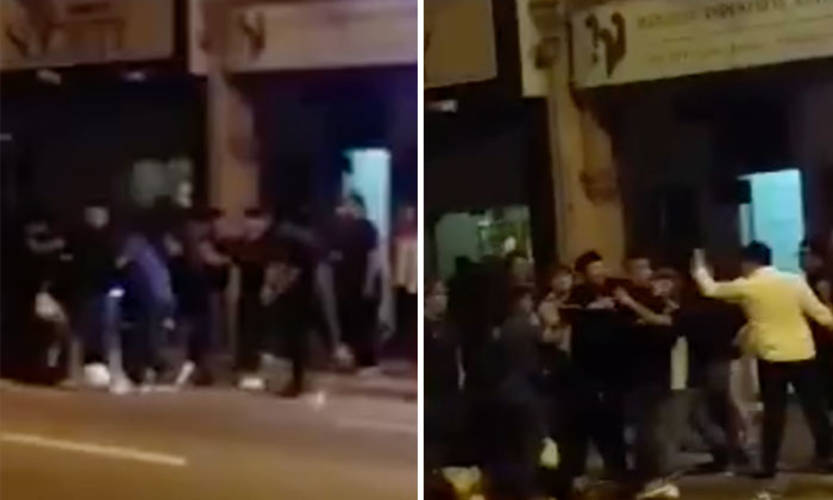 A fight outside a Jalan Besar nightclub which resulted in a man getting beaten bloody on the road was allegedly triggered by the victim confronting two men after his girlfriend was molested.

The incident which happened at 251 Jalan Besar on Tuesday (March 20) at around 2am, involved at least four men and one woman, reports Shin Min Daily News.

Reporters later visited the scene and an eyewitness, Mr Husen, 45, recalled an event held at the nightclub on the day of the incident.

He saw a slim man dressed in a white shirt gesturing to an employee of the club.

The gesticulate man first pointed at his girlfriend beside him and then his own waist, seemingly to indicate that someone had molested her.

“After that, the guy and two other men walked out from the club and started arguing.

“The two other men wore white and black shirts respectively.

“After a brief altercation, blows were exchanged.”

According to Mr Husen, the victim was no match for the two men who were much larger than him.

He was beaten until he collapsed on the road.

However, the two men did not stop, continuing to rain blows on him, until the victim vomited blood.

Sensing that the situation had gone out of control, several club employees rushed forward to intervene.

Attempts to stop the fight ultimately proved futile, and multiple skirmishes broke out.

Mr Husen said the victim was knocked out for about 10 minutes.

During the time, a friend of the victim tried to reason with his assailants but was restrained by a club employee. The friend started arguing with the club employee.

After a while, the man in white who attacked the victim walked out from the club and almost got into another fight with the victim’s friend.

Fortunately, the two were pulled apart by bystanders.

A video of the fight has since been circulating on WhatsApp, showing the severity of the beating.

At one point, the person who took the video comments:

He also pointed out that the man in white had stepped on the victim’s head even as he lay on the road.

She even flagged a cab but the obstinate victim was hellbent on making the two men pay.

Mr Husen revealed that the girl also tried to pull her boyfriend away when she saw that he was losing the fight, but the victim would not quit.

“She (the victim’s girlfriend) kept pleading with him not to fight. She was also shoved by a few other guys but didn’t seem to be injured.

“After her boyfriend hit the ground, she stayed by his side.”

In response to a Stomp query, a police spokesman said that they were alerted to a case of affray at 251 Jalan Besar on March 20, at 2.02am.

A 23-year-old man was conveyed to hospital and four other men were arrested in relation to the case.

Related Stories
Men kick and punch guy on road outside club at Jalan Besar
Man who got knocked out in Geylang attack: I just looked at them and they started attacking me
Fight at Orchard Rd: Man, 25, arrested for rioting after being taken to hospital
More About:
fight
injured
gang