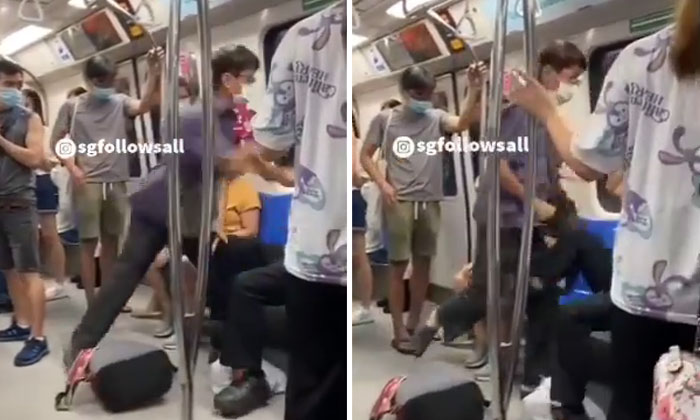 The two men, aged 67 and 73, are being investigated for affray.

The police told Stomp they were alerted to a fight on a train along the North-South line on Nov 27 at 7.13pm.

A man attacked an older commuter for allegedly playing music too loudly on an MRT train near Ang Mo Kio station.

Footage of the incident was posted on @sgfollowsall's Instagram and Beh Chia Lor - Singapore Road's Facebook page on Sunday (Nov 28).

The older man, who is seated, is seen kicking the other man wearing a purple shirt away.

The man in purple then hits the other with his fists.

The older man is heard shouting: "You are going too far!"

The man in purple spews vulgarities before falling to the floor while other commuters rush in to break up the fight.

He then tells the other man in Hokkien: "When you talk, you must make sense. Your volume is too loud!"

They continue arguing when a lady interrupts and tells the older man that he is "already old" and should not bicker.

The uncle then moves to a seat on the opposite side of the train as the man in purple continues to rant to another commuter about him.

The video has garnered over 185,000 views and 459 comments with most netizens saying even if the older man was blasting music, the other guy should not have resorted to violence.

One commenter wrote: "Just tell the uncle to lower the volume or move to another area cannot meh?"

Related Stories
Police investigating: 2 drivers get into a brawl in Geylang, blocking traffic
'Jackie Chan and Wong Fei-Hung' in Telok Blangah duel after too many drinks
Woman blocks bus with her car, gestures rudely at bus captain for not giving way to her at Aljunied Road
More About:
fight
dispute
MRT
music