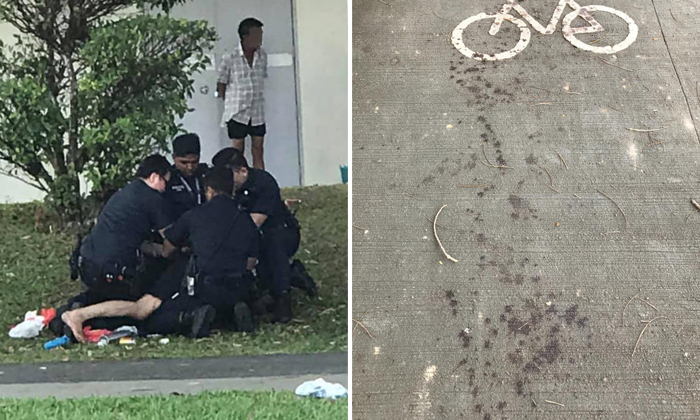 Armed with a penknife, a 48-year-old man attacked a group of five workers at Block 302 Canberra Road on Sunday (Jan 6) and injured two of them.

In response to a Stomp query, the police said they were informed about the attack at 5.35pm.

A police spokesman added: "When police officers engaged the man armed with the penknife, he was uncooperative and refused to comply with officers’ instructions despite repeated warnings.

"During the arrest, the man turned violent and aggressive towards the officers."

A photo posted on Facebook shows the man, who was arrested for voluntarily causing hurt by a dangerous weapon, being pinned down by four officers.

He was charged in court on Tuesday (Jan 8), reported Shin Min Daily News.

The group of five Chinese nationals, aged 21 to 30, are believed to be colleagues.

They had been on the way back to their dormitory after having hotpot at a coffee shop nearby when the attack occurred.

Preliminary investigations revealed that the man had allegedly challenged the group to a fight while they were walking, the police told Stomp.

A photo published by Shin Min shows a two-metre blood trail at the scene.

It is unclear what sparked the suspect's attack.

View more images of the incident in the gallery.