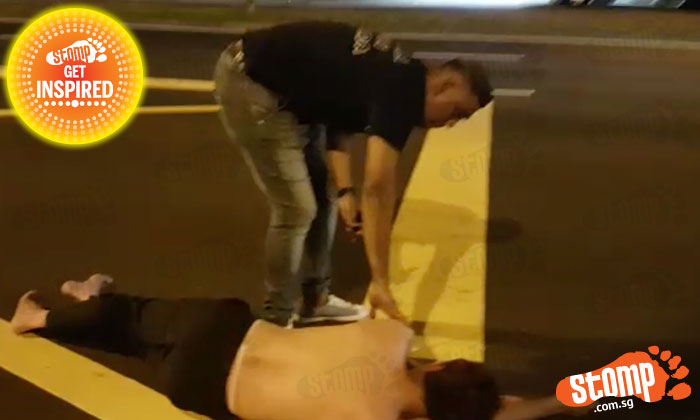 A middle-aged, half-naked man was lying in the middle of the road on a yellow box junction, oblivious to the oncoming traffic yesterday (May 20) at around 3am.

The incident, which happened at the entrance to Foch Road, was witnessed by Stomper Ita and a group of friends.

A member of the group, Max, quickly went to wake up the man, while another friend filmed the process.

From the video, the man is seen motionless on the road, his shoes placed beside him.

He did not respond to Max’s nudges at first.

However after a few more attempts, Max managed to solicit a grunt from the man and the latter sat up.

Max is heard saying: "Uncle, wake up. You’re sleeping in the middle of the road!"

Max also offered to help the man up, which the guy declined.

After sitting there for a while, the man stood up, put on his shoes and left.

Said Ita: "The man looked like he was drunk and he was not wearing a shirt. It could have been really dangerous if we hadn't woken him up."