Man texts prostitute to ask about rates, gets discovered by wife 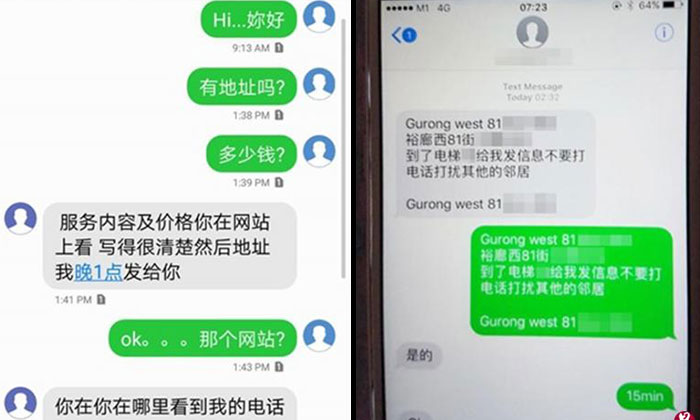 A woman checked her husband phone last Friday (Oct 20), and discovered that he had engaged the services of a prostitute based in a Jurong East flat.

She had reportedly become suspicious after noticing that her husband would frequently go for drinking sessions with friends, only returning the next morning.

The 31-year-old woman who wished to stay anonymous for the sake of her three children told Lianhe Wanbao that the den was located in a flat along Jurong West Street 81.

According to her, the prostitute who messaged her husband left him an address and invited him to look her up in the middle of the night.

She showed reporters the messages from her husband and the recipient.

The message from her husband read:

“Hello, do you have an address?

“He said you are very good.”

“The type of services we provide and prices are stated clearly on our website.

“I’ll send you the address later.”

After the man reached the designated address, the prostitute sent him another message, asking him to alight the lift one floor before the unit and use the stairs instead.

She also asked that he inform her of his arrival through a message rather than a call, for fear that it would alarm the neighbours.

When asked about the situation in the family, the woman said that she and her husband have been arguing these few months, and he would often come home drunk.

Occasionally, he would also hit her, she claimed.

However. she has never thought of divorcing him, hoping that he will turn over a new leaf instead.

Related Stories
Groom plays video of bride and alleged lover checking into hotel room during banquet
"My boyfriend texts another woman every day and says it is nothing"
'My friend's husband is cheating, do I tell her?'
More About:
cheating
prostitute
Jurong West