Man asked ex-GF for $2k, punched her after she told him to work for it at her chicken rice stall 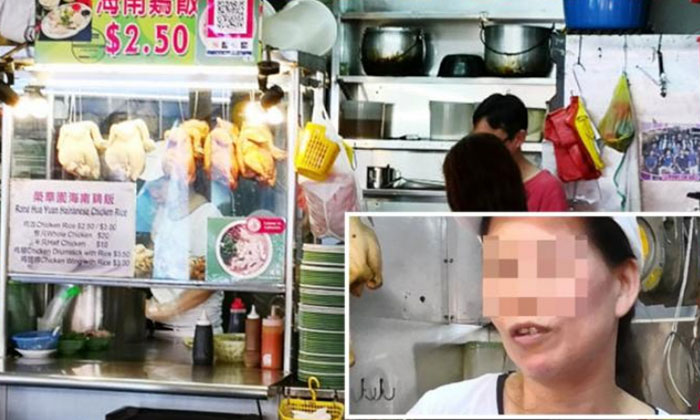 After getting sacked from his ex-girlfriend’s chicken rice stall, a man asked for $2,000 from the woman, only to get enraged after she suggested that he run her stall for the next three days and keep the takings instead. He proceeded to punch her three times.

The incident happened on March 20 this year and the accused, Ye Biao Guo, 53, pleaded guilty on Monday (July 9) to a charge of voluntarily causing hurt and another count of affray. Ye was sentenced to two weeks jail and fined $2,000.

The victim, Ms Chen Shuang Xian, 47, runs a chicken rice stall in a hawker centre at Block 16 Bedok South Road. Prior to the incident, Ye worked as a helper at Ms Chen’s stall.
The two were a couple about a year before the incident.

According to Lianhe Wanbao, Ms Chen is married and has a child.

The court heard that Ms Chen fired Ye from her stall in February this year after receiving many complaints from customers.

Ms Chen refused his request and suggested that she would let him run her stall for the next three days, during which he would be able to pocket the takings.

She also offered to provide the ingredients for free.

However, her suggestion did not sit well with Ye, who shouted at her: "I have no time!"

The two started arguing and Ye suddenly swung his fist at Ms Chen’s head. He punched her three times.

Another female stall assistant shouted for help after seeing the scuffle.

Ye quickly attempted to flee while  Ms Chen grabbed a tray and used it to hit Ye’s back.

After that, the two decided to head to a police station nearby to resolve the dispute but found that it was closed upon arrival.

Ms Chen then left and Ye did not pursue.

Ms Chen did not see a doctor after the incident. A police report was \ lodged and Ye was subsequently arrested.