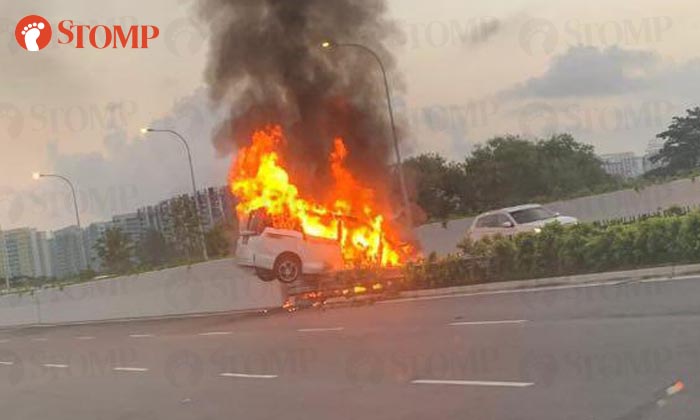 A 44-year-old man has been arrested by the police for suspected drink-driving when a car caught fire on Sunday (July 7), after it had apparently crashed into a road divider along Lorong Halus.

Stompers Lindy, John and Ivan K alerted Stomp to the incident with photos of the scene as they each drove past the area.

Lindy also shared a video of the accident with Stomp

In the video, orange flames are seen engulfing the car as smoke billows from it.

Ivan told Stomp that even though he was in an air-conditioned car, he could feel the heat from about ten metres away.

He said: "I was shocked and in trepidation as to whether there would be an explosion."

The Singapore Civil Defence Force (SCDF) told Stomp that they responded to a vehicle fire along Lorong Halus towards Punggol on July 7 at about 6.55am.

"There are no reported injuries and the cause of fire is under investigation."

In response to a Stomp query, the police said: "On July 7, at 6.53am, the police were alerted to an accident involving a car along Pasir Ris Industrial Drive 1 towards Punggol Central.

"The car driver, a 44-year-old man, was subsequently arrested for suspected drink driving.