Man arrested for drink driving after veering to opposite lane, crashing into car at Serangoon Central 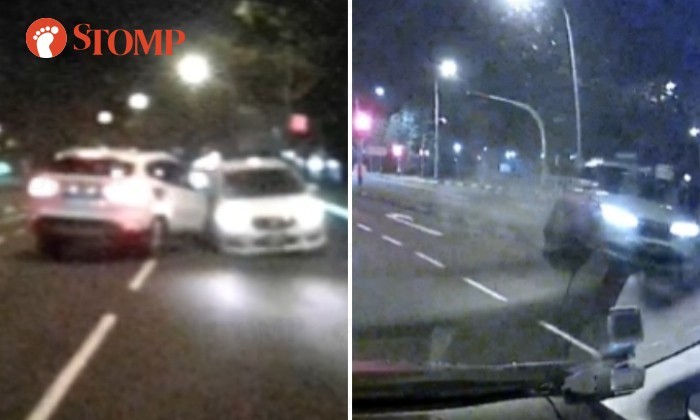 A 23-year-old man was arrested for drink driving after he veered into the opposing lane and crashed into an oncoming car at Serangoon Central on Thursday (Dec 24).

In response to a Stomp query, the police said they were alerted to the accident involving two cars at 1.35am.

"One of the drivers, a 23-year-old man, was subsequently arrested for drink driving," added the police.

Stomper Mervin was driving home when he saw a car veer across the road divider after making a right turn.

In the video that Mervin sent, a white car can be seen making a wide right turn before swerving over and past the road divider.

The rear in-car camera then shows the white car crashing into another car driving in the opposite direction.

"I can't believe my vehicle was just inches away from being hit by that car," Mervin said.

"We did not stop to see what happened after that because we were already near the junction and the accident happened behind us, not in front of us.

"I'm not sure if anyone got injured but I think that, as drivers, we must never take things for granted.

"When making a turn, we need to be slow because we never know whether the roads are slippery.

"I really pity the car behind me who got hit for no reason."