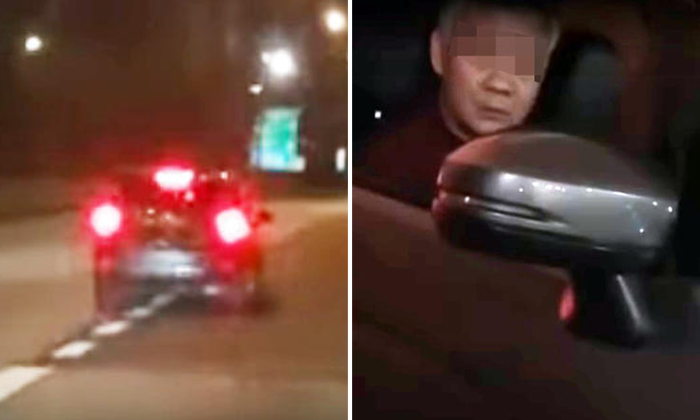 A 51-year-old man was arrested last Tuesday (Oct 8) for drink-driving after being caught on camera driving erratically along the Central Expressway (CTE).

Police said they were alerted to the case at 12.12am and subsequently nabbed the man.

A video of the incident was shared with ROADS.sg by a motorist known only as Nick, who said he tailed the Honda driver for 20 minutes until the latter "reached his house in Sengkang".

In the video, the Honda driver can be seen swerving in and out of its lane on the CTE towards Woodlands. He also had his headlights turned off.

Nick said in a caption: "I caught up to him and recorded this video with my hazard lights on to warn other road users of this guy's behaviour.

"He got into countless close calls with many vehicles on the road and ran a few red lights when he exited the highway."

Nick, who subsequently called the police, said he then followed the Honda driver home to make sure that he did not get into an accident.

According to Lianhe Wanbao, Nick tailed the Honda driver for around 10km to a multi-storey carpark in Fernvale Link.

"When I caught up to him at his carpark, he reeked of alcohol smell and kept denying he was drunk," added Nick in his post.

"A fellow witness who was washing his car at the carpark saw what happened and came over to help because the driver kept shouting vulgarities."