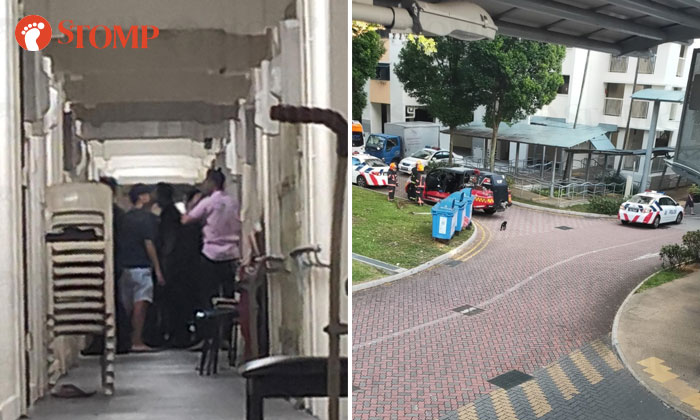 A 35-year-old man has been arrested for allegedly attacking a 60-year-old man with a knife at Telok Blangah Crescent.

Another three men, aged between 28 and 60, were arrested for their suspected involvement in harbouring an offender.

A Stomper alerted Stomp to the incident after noticing several police vehicles near Block 3 Telok Blangah Crescent on Sunday (Mar 15).

"They were on site since the afternoon and were searching for the suspect until late.

"I understand from my neighbours he was fighting with a weapon and that the victim was injured."

The police said in a statement that they were alerted to a man carrying a knife in a public place in the vicinity of Telok Blangah Crescent.

"Preliminary investigations revealed that the man is believed to be involved in an earlier incident where he used a knife to attack a 60-year-old male victim along Telok Blangah Crescent," the statement said.

"Through investigations and with the aid of images from police cameras, officers from Central Police Division established the identity of the man and arrested him within 12 hours."

A knife was seized as a case exhibit.

The 35-year-old man will be charged in court on Tuesday (Mar 17) with voluntarily causing hurt by dangerous weapon.

The offence carries a jail term of up to 7 years, or a fine, or caning, or any combination of such punishments.

Investigations against the three other men are ongoing.

The offence of harbouring an offender carries an imprisonment term which may extend to 10 years and shall also be liable to a fine if the offender’s offence is punishable with death.

Related Stories
13 men arrested for suspected involvement in rioting with deadly weapons in Choa Chu Kang
Man arrested after bringing out knife during dispute at Punggol Way
Man, 21, arrested after being found with knife at North Bridge Road and trying to flee
More About:
arrested
knife
weapon