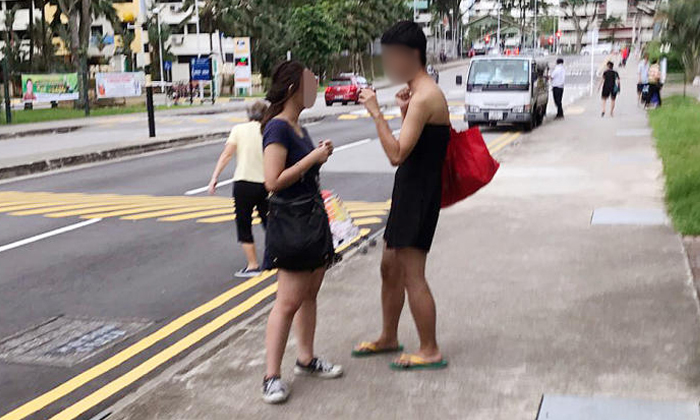 A man who was jailed four years ago for criminal intimidation and exposing his private parts was arrested last week for allegedly molesting a 14-year-old girl while wearing a dress.

Soh, 26, had sexually harassed the victim along Lorong 3 Toa Payoh on Wednesday night (May 30), at around 10pm, leading her father to make a police report on May 31.

He was arrested on June 1 and charged in court with outrage of modesty the following day.

Soh, who was believed to have been wearing a black dress at the time of the incident, had also apparently tried to befriend the victim and asked her sexual questions.

The girl later told her father about what happened. Sensing that something was amiss, her father then informed the police.

In 2014, Soh was sentenced to four months in jail on charges of criminal intimidation and for exposing his private parts. He had also violated a Remission Order.

Soh will return to court on June 14. If convicted of outrage of modesty, he may be punished with up to two years' jail, or fined, or caned, or any combination of the three.

According to Shin Min, Soh is also the younger brother of Soh Wee Kian, who is currently serving life imprisonment for the culpable homicide of a woman in 2010.

In that incident, Ms Hoe Hong Lin, a 32-year-old mother of two, was stabbed to death on the day of the Mid-Autumn Festival (Sep 22) near her home in Woodlands.

Soh's stepfather also served time for drug offences while his younger brother was previously sent to the Boys' Home after committing arson.