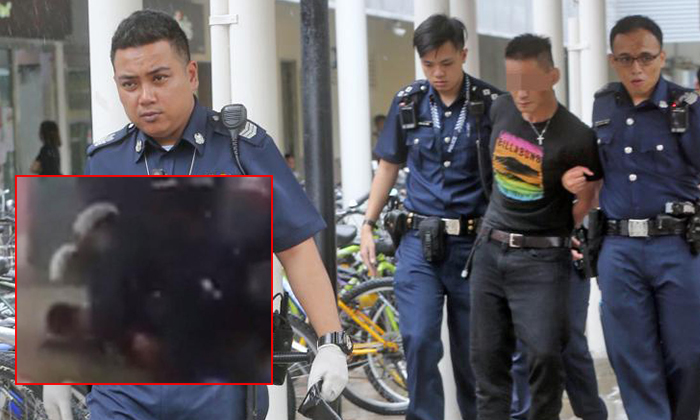 In response to media queries by Stomp, the police said they were patrolling the area at 12.51pm when they came across an incident.

Stomper Abg Adi had earlier alerted Stomp to the incident and contributed a video of the ensuing struggle that the man put up during his arrest.

According to Shin Min Daily News, the Chinese male had been behaving suspiciously and attracted the attention of TransCom police officers.

When officers questioned the man, he was able to answer them. However, when they requested to search him, the suspect panicked and fled on foot.

A 21-year-old mobile phone store employee, Ms Liu, described how she saw the man, who was tanned and wearing a black shirt with trousers, running from the direction of the bus interchange.

"He was not steady on his feet while running and knocked into two of my cupboards, giving me a shock," she said.

"Four police officers then rushed forward and pinned him to the ground. He struggled frantically but was eventually subdued."

The man put up a struggle that lasted 10 minutes and attracted a crowd of around 30 onlookers.

The case has been referred to the Central Narcotics Bureau (CNB) for investigation.