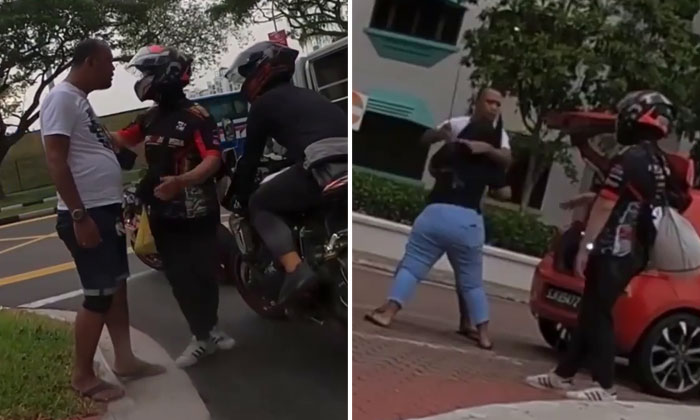 A 39-year-old man was arrested for rash act and criminal intimidation after he was caught on video threatening three riders in a confrontation at Bedok North Road on Monday (Aug 2).

Several Stompers alerted Stomp to the road rage incident that showed a red Toyota making a wide turn while turning into a carpark near Block 185 Bedok North Road.

The driver stops his vehicle after the riders gesture at him and exits his car to confront them. He is not wearing a mask.

He is then heard demanding to know if they "stay here" while pointing at a nearby block.

He returns to his vehicle to retrieve what looks like a fishing rod while a woman tries to stop him from approaching the riders again.

In response to a Stomp query, the police said they received a report at 8.59pm regarding the dispute that had occurred earlier that day.

"A 39-year-old man was subsequently arrested for rash act and criminal intimidation," a police spokesman said.

"He will also be investigated for the failure to wear a mask when he was not in his ordinary place of residence, which is a breach of Regulation 3A(1) of the COVID-19 (Temporary Measures) (Control Order) Regulations 2020."