Man arrested after smashing taxi with helmet, throwing windscreen wiper at it while baby was onboard 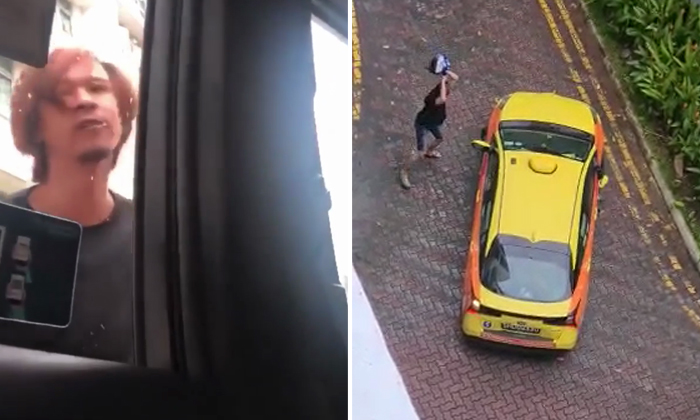 A 30-year-old man who was caught on camera smashing and hitting a taxi in Choa Chu Kang has been arrested.

Several readers alerted Stomp to videos of the incident, which occurred at Block 804B Keat Hong Close on Sunday evening (Oct 10).

In one video, the man can be seen picking up his motorcycle helmet and using it to smash the taxi, causing its side mirror to fall off.

The man is then seen prying off the taxi's rear windscreen wiper and throwing it at the vehicle. He can also be heard hurling vulgarities.

The police said they were alerted to the incident at around 6.10pm.

"Preliminary investigations revealed that the man had allegedly confronted the taxi driver over a traffic dispute," they added.

"During the confrontation, the man allegedly used his motorcycle helmet to hit the taxi, resulting in damages to the taxi.

"The driver and the passengers on board the taxi, including a baby, were unhurt."

In response to a Stomp query, Ms Tammy Tan, group chief branding and communications officer of ComfortDelGro Corporation Limited, said: "At about 6.15pm on October 10, an unknown motorcyclist started attacking our stationary taxi with his helmet.

"Our cabby immediately contacted our customer contact centre for assistance and the police arrived soon after.

"We are thankful that both our cabby and the passengers onboard were uninjured although we have no doubt that it had been a traumatic experience. We have reached out to them to check on their well-being.

According to Ms Tan, a police report has also been made and ComfortDelGro will be assisting the police in their investigations.

Through extensive ground enquiries, officers from Jurong Police Division established the man's identity and arrested him on Monday.

The man will be charged in court on Thursday for rash act, police said.

He is also being investigated for mischief, using threatening behaviour, and failing to wear a mask in a public place

The offence of rash act carries a punishment of up to six months in jail and/or a fine of up to $2,500. Mischief carries up to two years or a fine, while using threatening behaviour is punishable by a fine of up to $5,000.

The police said they have zero tolerance towards such acts of violence and will not hesitate to take action against those who blatantly disregard the law.

Related Stories
Man flashes middle finger, gets out of vehicle to yell at another driver for cutting him off
BMW driver taunts motorist and plays braking game after getting honked at
Motorcyclist smacks Mazda driver's side mirror for allegedly blocking him from lane splitting
More About:
road rage
biker
motorcyclist
taxi
cabby
dispute
mischief
rash act