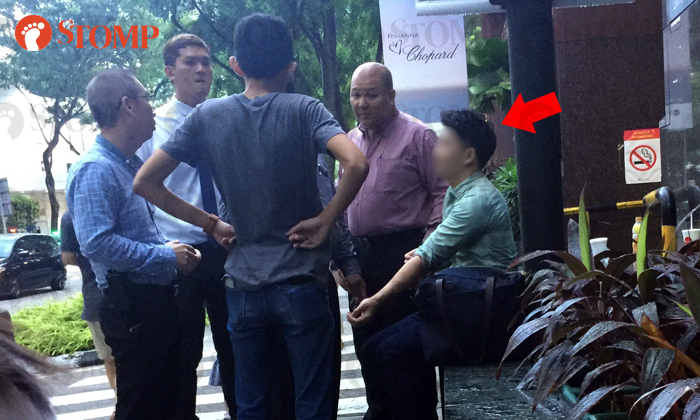 A 26-year man was arrested for public nuisance and insulting the modesty of a woman at Takashimaya Shopping Centre on Aug 6.

Stomper ashe said there was "a lot of commotion" outside the mall, after a male passer-by pursued the suspect.

She told Stomp, "The man in grey shouted, 'STOP HIM!' when he was chasing the culprit, who then fell due to the slippery ground.

"Takashimaya's security personnel were informed and witnesses called the police."

Stomp understands that the passer-by had seen the suspect holding his mobile phone in an improper position while going up an escalator in the mall.

The passer-by then chased after the suspect outside Takashimaya and managed to detain him with the help of security personnel.

In response to media queries by Stomp, the police said they had received a call for assistance at 391A Orchard Road, at 6.43pm.

They subsequently arrested a 26-year-old man for public nuisance and insulting the modesty of a woman.