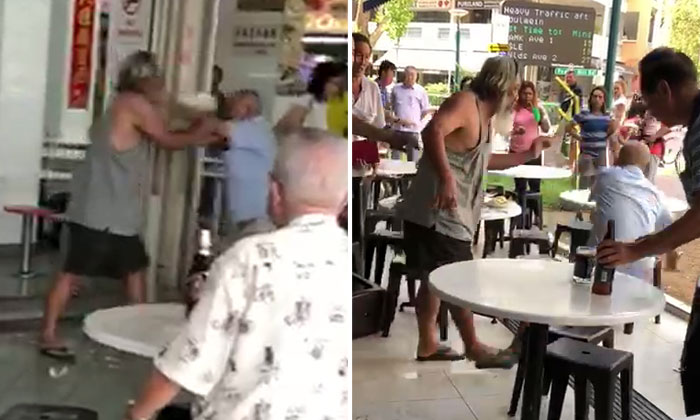 A 64-year-old man was arrested for affray after a fight broke out at an Upper Cross Street coffee shop on Saturday (Aug 31).

Stomper Winston alerted Stomp to a video of the incident that has been circulating online.

In the video, a bearded man wearing a singlet is seen arguing with a bald man.

The situation escalates when the bearded man throws his beer bottle at the other guy who picks it up and throws it back.

The bearded man then goes after the other man and shoves him repeatedly, causing him to fall to the ground.

Towards the end of the video two men try to intervene with one man pulling at the bearded man's singlet to hold him back.

Winston told Stomp that he frequents the coffee shop and often sees the bearded man there "causing trouble.

"He often scolds people's mothers," said Winston. "He is a troublemaker."

In response to a Stomp query, the police said they were alerted to a call for assistance at 34 Upper Cross Street at about 3pm.

"A 64-year-old man was subsequently arrested for affray," a police spokesman said.

This is not the first time a fight has broken up at that particular coffee shop.

Last month, two men were arrested for affray after they were seen arguing and throwing punches at each other.

Related Stories
Torn shirts, bloody faces in fight between 2 men at Wellington Circle
3 arrested after youths seen beating up man who said: "They challenged me"
2 men arrested after throwing punches at each other at Upper Cross Street coffee shop
More About:
fight
argument
dispute
arrested
affray