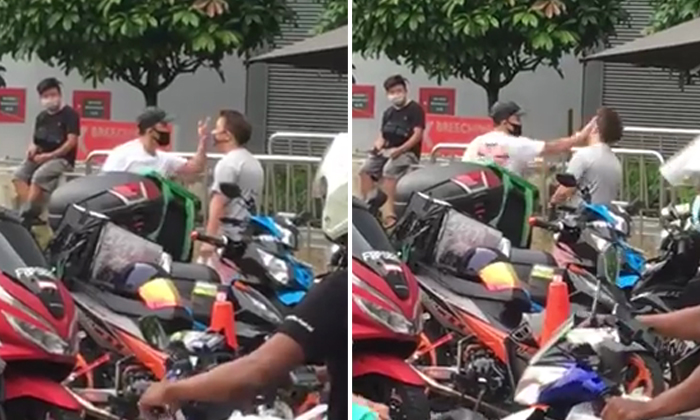 A 52-year-old man who was caught on camera assaulting another guy in a parking lot dispute has been arrested.

The incident occurred at the open space parking area near NEX shopping mall on Saturday (June 6), at around 5pm.

Several readers alerted Stomp to a video of the incident that was posted on Facebook.

In the video, a man in a cap can be seen hitting another guy in the face multiple times. At one point, the latter's mask falls off from his face due to the impact.

In a statement on Thursday (June 11), the police said they have arrested a 52-year-old man for public nuisance and voluntarily causing hurt after being alerted to the case on June 7.

The suspect had apparently been "unhappy with another man over parking lot issues and had allegedly slapped him several times on his face".

Through enquiries and follow-up investigations, officers from Jurong Police Division established the identity of the suspect and arrested him on June 10.

Separately, the offence of voluntary causing hurt carries a jail term of up to three years and/or a fine of up to $5,000.

"The police take a serious view of such egregious behaviour, and will not hesitate to take action against those who blatantly disregard the law," they added in the statement.