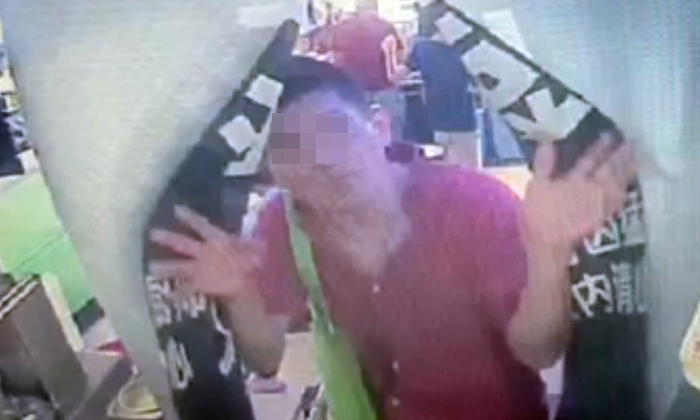 A 62-year-old man was arrested he allegedly stole a pouch containing $4,000 stolen from a Japanese food stall at Old Airport Road Food Centre on Nov 17.

The 40-year-old owner of Japanese food stall Unkai brought a large amount of cash out because she was going to exchange some money for her trip to Thailand.

According to Lianhe Wanbao, footage showed the man in a red t-shirt reaching towards a shelf and retrieving a pouch that was in a red plastic bag before leaving. The entire act was committed in at most five seconds.

In an interview, Huang said: "I placed the pouch on a shelf in the stall and helped open up for operations.

"The man obviously knew where the pouch was, if not he wouldn't have been able to commit the act so quickly."

Huang explained in her Facebook post that she brought $4,000 cash out because she was going to a money changer to exchange currency for her holiday trip to Thailand.

She also appealed to netizens to provide any clues about the man.

Reporters who visited the stall on Tuesday (Dec 10) said a stall assistant affirmed that Huang brought so much cash out because she and her family were about to leave for Thailand.

She said: "My boss and I were both in the stall that day. Since it was a Sunday, the lunch period was very busy so we didn't realise anything until about 4pm when my boss noticed her pouch was missing as she was about to buy something."

Responding to a Stomp query, the police said: "The police confirm a report was lodged and a 62-year-old man was subsequently arrested in relation to the case.

Related Stories
'Return my iPhone that I left on shop counter and I will withdraw police report'
Man appealing to uncle who took his $50 from Pasir Ris Kopitiam card kiosk to return it
Customer flees Holland Drive salon without paying after asking for discounts, says her dad is policeman
More About:
theft
stealing
Old Airport Road Food Centre
arrest