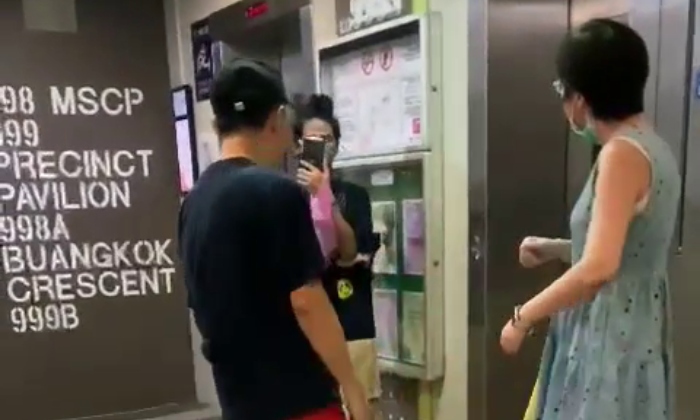 Should one mask up when taking the lift?

Well, one man was so adamant that everyone should wear a mask that he chased a couple out of the lift.

In a video that was recently shared on Facebook, the man can be seen arguing with the couple outside a lift at Block 998B Buangkok Crescent.

In the two-minute clip, the man points out that the couple are not wearing masks, to which the husband responds that it is no longer mandatory to do.

998B buangkok Crescent, What is wrong with Singaporeans?

In an interview with Shin Min Daily News, the resident surnamed Zhu, recounted that the incident occurred at around 8pm on Sunday.

Mr Zhu and his wife were on their home after dinner when they walked into the lift where the man was.

"His tone was very hostile, and he told us to get out at once," said Mr Zhu.

When the couple saw the man using his handphone to take their photos, they raised their hands to block him. That prompted the man to call the police as he thought the couple were about to hit him.

Mr Zhu said after speaking to the police, both parties decided not to pursue the matter.

"I just did not want to see others being bullied. If the man is worried, he can ask us nicely, or take another lift," he added.

Mr Chen, the man caught in the row, offered his side of the story. He said he is aware that "the government does not force everyone to wear masks".

Mr Chen, who has been living in the area for about five years, added: "The elevator space is small and there are so many cases. I think we should respect one another."

He also said that he believed in the principle of "first come, first served".

"If someone is already in the lift and does not wear a mask, I will leave. If I am inside, then I think it is okay for me to ask the other party to go out," said Mr Chen.

About 10 residents in the block told Shin Min that they have encountered Mr Chen's scoldings for the same reason.

A resident, who wanted to be known as Ms Liu, said that after someone posted the video to the residents' chat group, others shared they had the same experience.

Another resident named Ms Yan said she was told off: "He yelled at me and said he did not want to take the same lift because I was not wearing a mask."