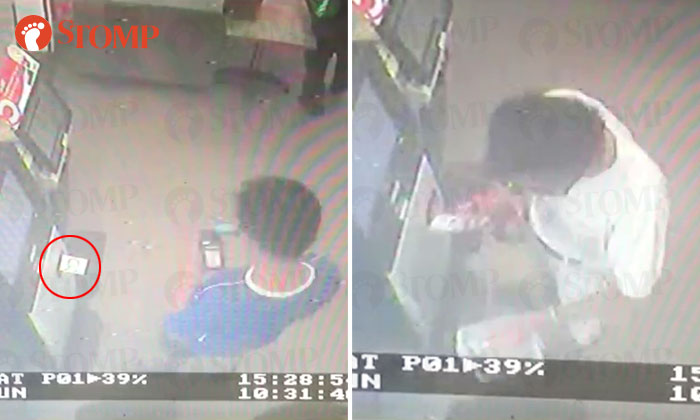 A man was caught on video taking a $50 note that did not belong to him from a card kiosk at Pasir Ris West Plaza's Kopitiam on Nov 30 at about 3.20pm.

Stomper Jeffrey shared with Stomp what happened, hoping that the man will return him his $50.

"I thought the money had been credited and left the machine, not knowing the note had been rejected.

"When I went to buy food, I was told there was no value in it so I went back to the machine to check.

"I was trying to ask the man who was at the machine about it but he didn't want to listen to me and turned and walked away."

Jeffrey said that he approached the Kopitiam's staff about the matter and was provided CCTV footage of the incident the next morning.

From the video, the man Jeffrey had tried asking about the money had taken the $50 out of the machine.

"I'm not going to make a police report because I acknowledge my mistake.

"I was in a hurry and just took my card without checking.

Related Stories
Customer flees Holland Drive salon without paying after asking for discounts, says her dad is policeman
Rider offering $500 reward for information on e-scooter that went missing from Our Tampines Hub
Man's $600 e-bike stolen from Potong Pasir HDB block: "I used it to travel to work"
More About:
stealing
steal
theft
kopitiam