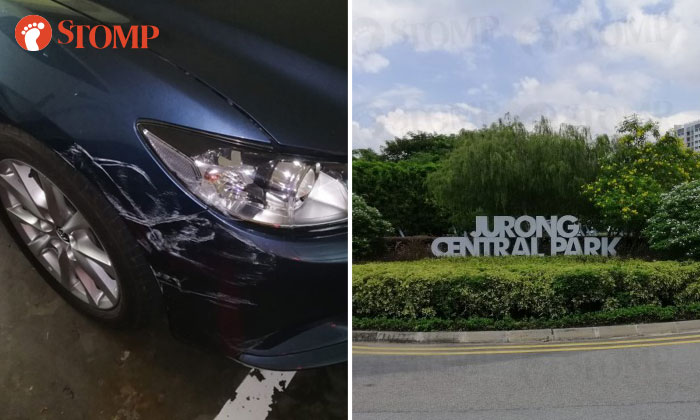 Stomper THH is appealing for witnesses to come forward after his car was damaged in a hit-and-run incident while parked at Jurong Central Park carpark from Saturday (Oct 19) to Sunday (Oct 20).

The Stomper had parked his car at the carpark on Saturday at around 7.15am before catching a bus with his friend to Johor Bahru, Malaysia (JB).

He told Stomp he often leaves his car at the same carpark whenever visiting JB and has never encountered an incident like this before.

When he returned to his car on Sunday at about 11am, he was shocked to find the right side of his car's bumper scratched and dented.

"There was no note left behind by the culprit for us to contact him or her for compensation," he said.

"As my in-car camera was not turned on in park mode, we failed to capture the whole incident."

"I hope to appeal to anyone who happened to witness the incident."

If you saw what happened, kindly email Stomp at stomp@stomp.com.sg or WhatsApp 9384 3761.