Man apologises, turns himself in after posting video of him hitting dog and burning its fur 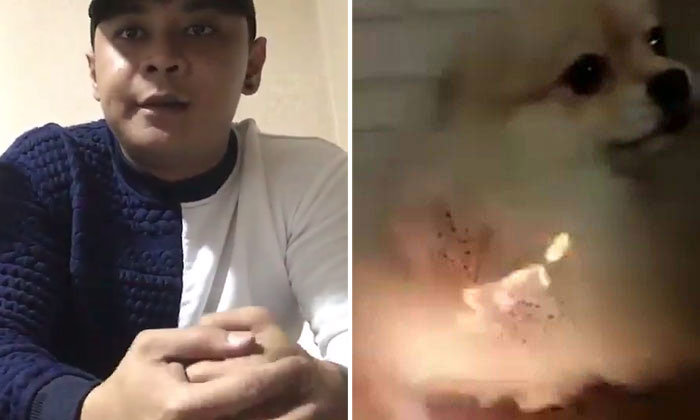 A man has come forward and taken responsibility for filming himself hitting a Pomeranian dog and burning its fur.

Stomp earlier reported that the Society for the Prevention of Cruelty to Animals (SPCA) was investigating the incident after the video was posted on Facebook on Sunday (Nov 3).

The man allegedly posted the video himself with the caption: "Dont make I angry when I no money, my dog also I no give chance (sic)."

The SPCA said on Monday (Nov 4) that it had visited a flat in Tampines with the police as part of the investigation.

Preliminary investigations revealed the dog is not in Singapore.

The man, who introduced himself as Samuel, posted a video on his Facebook page on Tuesday (Nov 5), asking to be forgiven for his actions. A woman seated next to him translates his apology in Thai.

In the video, he says the video he posted on Monday was "from a few months back".

"I'm sorry for what I've done. I promise this will be the first and the last time.

He says that he has asked his friend to bring him to the police station to surrender.

"I'm ready to face all the punishment (sic).

"I hope everybody can give me a second chance.

"I promise, no more next time.

The woman in the video, Min Min Yo, posted photos of Samuel at a Thai police station as well as a video of him interacting with the Pomeranian.

In an update on Nov 5, the SPCA said: "Yesterday, the suspect in this case reached out to the SPCA and offered to take responsibility for his actions, as well as to have the dog assessed.

"He has since visited the Thai police to own up to what he did.

In response to a Stomp query, the police confirmed a report was lodged and the case has been referred to the Animal & Veterinary Service (AVS), a cluster of the NParks board, for investigation.

NParks said the AVS is aware of the incident and understands the matter is now being handled by the Thai authorities, reports The Straits Times.

Related Stories
SPCA investigating case of man hitting dog with helmet and setting its fur on fire
Man repeatedly slaps dog with slipper at Pasir Ris: There is no reason to hit a dog, says SPCA
Woman picked chihuahua up by its neck and threw it down 1.5m, fed it only once every few days
More About:
animal abuse
animal cruelty
SPCA
dog
apology